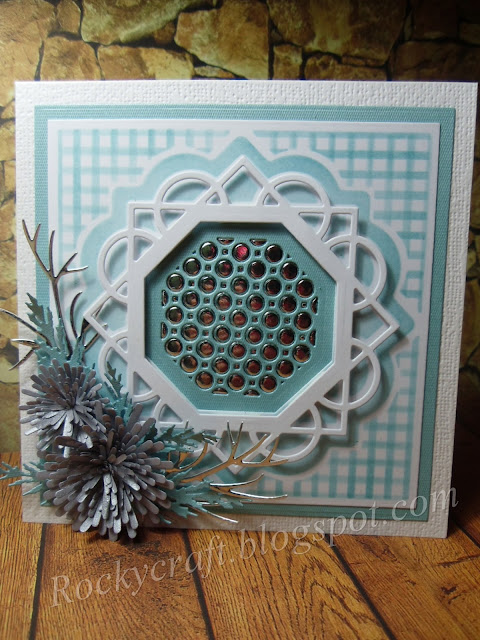 This is another of the new die sets from John Next Door, he named it Oundle, the home of the Hochanda studio. I love this set, it has so many different possibilities with a beautiful shape at the heart of it all. 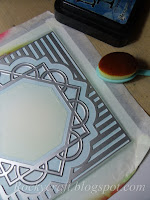 I decided to use the background die and the frame die as stencils, I used Lucy's trick and put a magnetic sheet under my card so the dies wouldn't move when I was colouring. I also masked off the outside edge to keep it clean, Stix2 stencil tape is perfect for this.
Once the card was all masked up I put the dies on and began to colour with Distress Ink using one of the amazing blending brushes from CraftsToo. I am so impressed with these brushes, they don't lift even the most delicate mylar stencil when colouring. 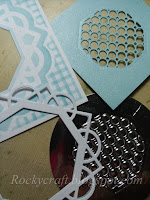 To get the chequered look I cleaned off the die and turned it over, turning it round didn't change the direction of the stripes, and inked again.
After removing all the tape I trimmed the card and die cut the centre shape, I also die cut the centre decorative die from a piece of teal card to go under the centre hole and embossed a piece of silver mirri to go behind that.
You can use these dies to emboss as well as cut, it's just a case of changing the 'sandwich' in your machine and using an embossing mat, a soft rubber like mat that will absorb the pressure from the dies edges stopping it from cutting through the card. 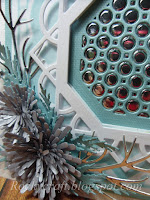 All the pieces were stuck together which looked OK, but not quite nice enough. The answer was to die cut a frame in white card and mount this with foam over the stencilled frame.
Luckily I had in my stash some teal card that matched the ink colour perfectly, sadly I have no idea where it came from so I'm using it sparingly. A mat layer of this teal card, with the centre cut out for another project, was added before going on a white card blank.
Using the Chrysanthemum die I cut from silver paper and made two flowers, one large and one small. Lesley's twigs are cut from silver mirri and the Aster Leaves were cut from the piece that came out of the mat layer.
I have started to use square cards with the fold at the top, like John does, as they stand well and look better on the mantle with full focus on the front rather than at an angle. I thought it would slide down and collapse but if you use a good card weight it doesn't budge.
Materials List   (available from your local craft shop)JND171 - Oundle die setJND187 - Twigs die set
JND117 - Chrysanthemum die
JND175 - Aster Leaves die set
CAT013 - Blending Brush set of 3
S56994 - Low Tack Stencil Tape
S57262 - 3D PVA Glue from Stix2
I would like to enter this card in the following challenges:
Crafty Catz - #523 Anything Goes
Creative Fingers - #195 Anything Goes
Love To Craft - #51 Anything Goes
The Sisterhood Of Crafters - Lots Of Layers     Top 3
Posted by Rocky at 14:00