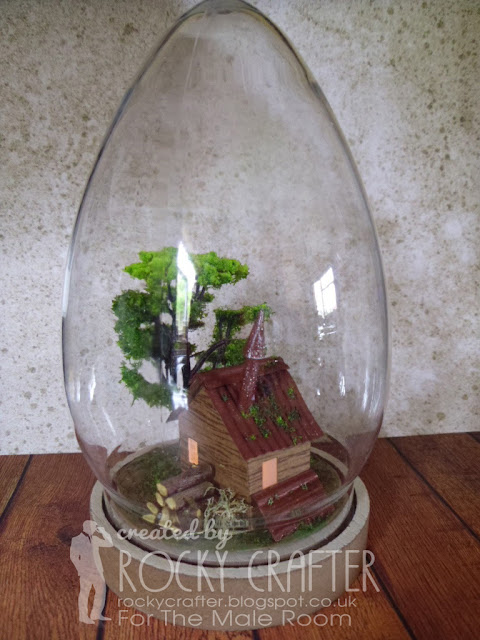 This fortnigthts challenge at The Male Room is to make something other than a card. On a recent trip out with Mum we found these empty domes, I love to see them at Christmas but always think it's a shame they're not used the rest of the year. There was my challenge, to make a summer globe. The clear dome is plastic so that makes it much easier to work with and more user friendly when it comes to young people. 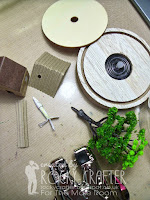 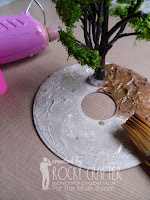 There is a small hole in the bottom which is just about big enough for a battery tea light, I did have to file away a little more to get mine to fit properly.
There is also a wooden disc inside to put your display on but I chose to use a thick card disc instead. To get rugged texture on the ground I used some hot glue and squished it about a bit, stuck my tree on and then painted it all with a mix of green and brown. I sprinkled some modelling greenery on top of the wet paint for added effect. 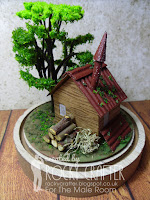 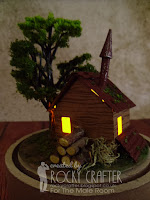 The cabin in my wood is a die cut house with an added corrugated iron roof and stove pipe chimney. These I painted with some Rusty Patina and added a few bits of greenery for moss. The chimney has a light rubbing of silver wax on it.
I used small pieces of vellum to cover the windows so that the light would appear more opaque and to make sure that the candle can't be seen through the windows.
The log pile is small bits of a tree branch chopped into lengths and stuck together with PVA. A little real moss was added to form a bush beside the log pile and another piece of corrugated card lent up against the wall of the cabin to add interest. 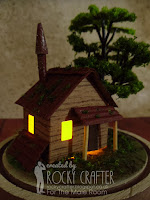 The porch is a small piece of corrugated card stuck on to the outside wall, with chopped down toothpick poles to help hold it up.
As with the Christmas globes it looks much more effective when the candle is on and the room it's in is dark. I'm working on a way to suspend a small bird from inside without the attachment being seen.
Please come along and join our challenge at The Male Room, any masculine project other than a card. Pop over and see what inspiration the DT have come up with. 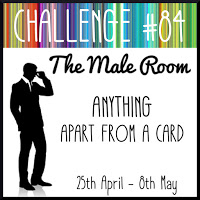 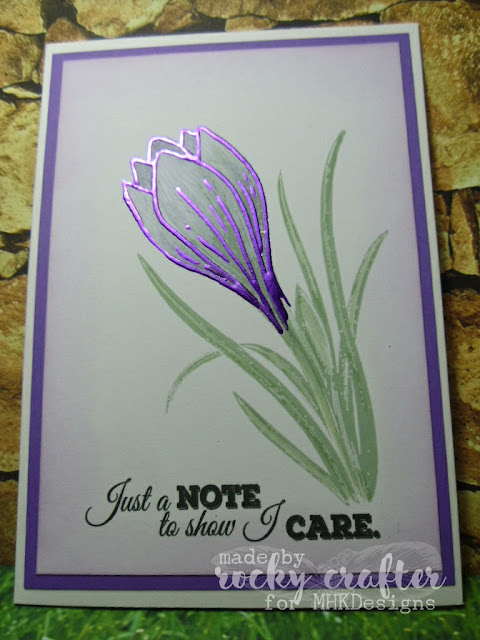 Welcome to my designer inspiration for April at MHK Designs, this card was made using the new set Caring Crocus.
The image was changed to green before being printed on to white card. The leaves and body of the flower have been coloured with pencils, then the flower head outline has been foiled. Using a 2in1 glue pen I drew around the flowers petals and then used a small sheet of foil to give it a purple shine.
A little ink around the edge of the image panel helps bring it into the purple mat layer before being mounted on a white card blank.
I used to think digital images where just 'print and colour' so not very useful, oh how wrong I was!  They can be sized to fit your needs, turned around, you can alter their colour, take bits off, add bits from other digis and all that before you print. Once printed the colouring can be done with almost anything in your stash, even glittered or foiled.
So I would like to say a big THANK YOU to MHK Designs for opening my eyes to the world of digital images. 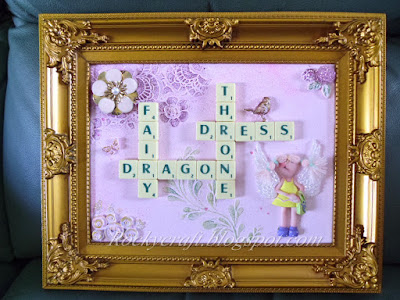 Apologies for the late arrival of my project for Altered Eclectics, lots of things have been happening here, some good and some not so good, but that's life. Thank goodness for crafting, sometimes it's the only thing to do! 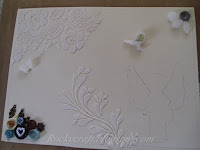 This project is for a local charity shop, a way of showing how all the odd bits and bobs can be used to make a mixed media item.
It all started with some scrabble tiles and a few buttons, then a good rummage through all my odds and ends.
The frame is plastic, also found in a charity shop, it had a back but no glass. I cut a piece of mount board to fit in place of a canvas to work on. 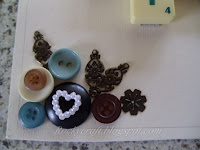 With the board in the frame I drew around the inside edge, so I knew not to put any embellishments beyond that line.
With my trusty hot glue gun I began to add buttons, broken bits of jewelry and shapes made with hot glue in a silicone mould. Once these items are painted they take on a whole new look whilst adding lots of great texture to the project. 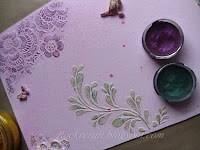 I drew around the fairy so I knew where she would be going, that way I could avoid putting anything that would be underneath her. Using some stencils and a tube of filler I added some more texture to the board.
Once all the filler was dry I painted a layer of gesso over the whole board, then a couple of layers of acrylic pink paint. A spritz with a pink mica spray added some subtle sparkle. 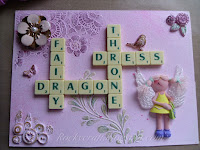 With all the paint dry it was time to add colour to the texture with some gilding wax.
Before I started glueing bits on I had taken a photo of where I planned to put all the bits, so with to hand I started to add the finishing touches. A hot glue gun in hand I stuck the letters, flower, fairy and her wings to the board, along with a glitter covered flower in the top corner. It wasn't exactly as the starter picture but close, slight adjustments along the way which added interest.
All that remained was to pop it in the frame, it was at this point that I was SO glad I had left that small border around the board, but the fairy could have been a little lower so she stood on the frame instead of floating a bit above it.
The board bowed slightly, probably due to the paint, so I used hot glue on the back to seal it to the frame in the corners and along the edges. All that was left was to pop the back on and move the hanging points for a horizontal picture.
Most of the items have come from charity shops, with the exception of the hot glue gun, waxes, spray and mount board, and they were already in my stash. To make something pink and girly was a little out of my comfort zone but I'm not too unhappy with the result.
There is still a fortnight left to enter your project with Altered Eclectics, anything but a card or an ATC, we look forward to seeing you work. 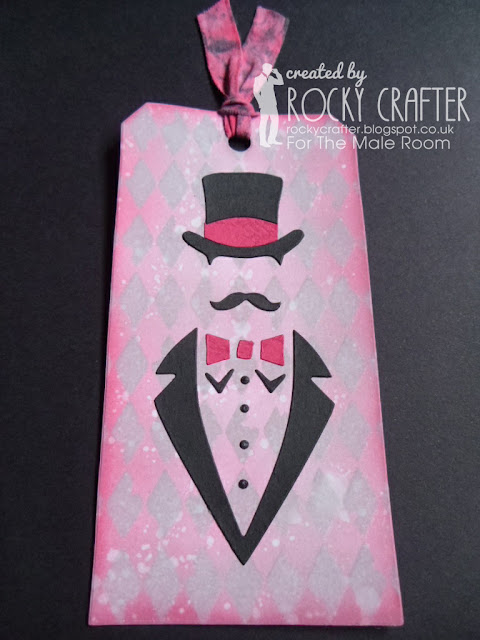 This fortnights challenge at The Male Room is all about symmetry, there are some great examples over on the blog from our DT. 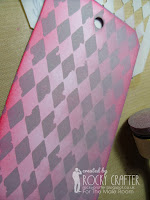 I started with a white tag which I coloured with red Distress Ink, making the edges much darker than the middle, this was dried off with heat. The next step was to add some pattern to the background, using a stencil and Distress Oxide Hickory Smoke I worked the pattern on to the tag, this was also dried off with a gentle heat. The next layer was to go over the whole tag with the same grey Oxide ink to dull it all down a little, to finish the tag was spritzed and flicked with water. 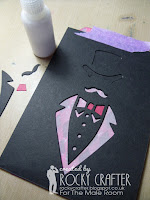 Using a Sizzix die I cut the Dapper gentleman in black card and then the bow tie and hat band in dark red. The black card was taped to the tag to use as a guide because I wanted to use the cut out parts, this helped me place the die cuts in exactly the right place to build the picture.
Once removed the black card can be used to make another project, it could be a card to match the tag for a birthday.
I have kept the ribbon simple by staining some cotton ribbon with the same Distress Inks used on the tag.
Please come and join us at The Male Room with your masculine symmetrical projects, we would love to see what you make. 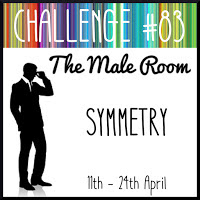 I would like to enter this tag in the following challenges:
The Paper Girls - Masculine Birthday   (F)
ARTastic - Black, White and one other   (M) 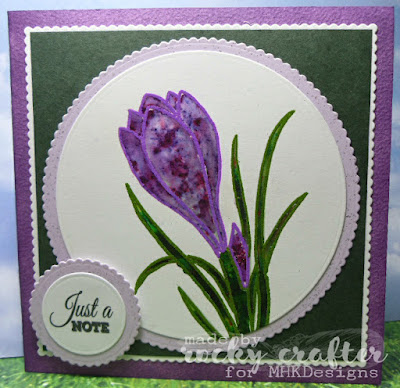 Sorry I'm a little late with my project for MHK Designs challenge, I seem to have lost more than one hour as the clocks changed! The card was made but the post wasn't ready.
For this card I have used the new set called Caring Crocus. I printed the image and then used an embossing pen to trace around the edges of the image, then I used coloured embossing powder to outline it.
To colour the image I have used some powder type paint sprinkled over each area after it has been painted with a water brush, I have found it's best to work one small area at a time.
Finishing off with a bit of matting and layering in matching colours it was completed with a layered greeting popped up on a foam pad.
Please pop over to MHK Designs blog, if you haven't already, and take a look at all the DT inspiration for this gorgeous spring set.