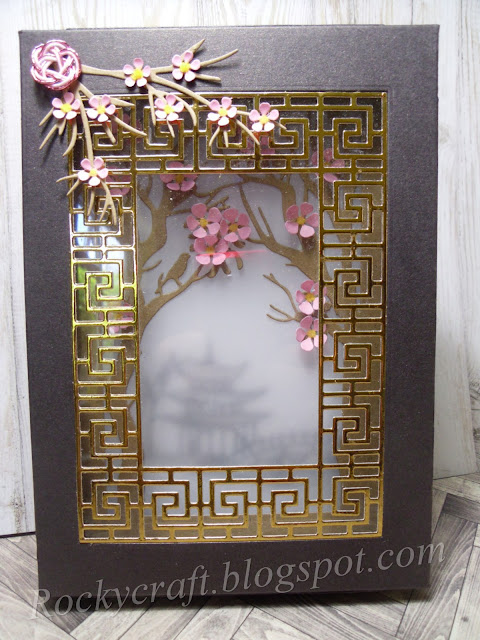 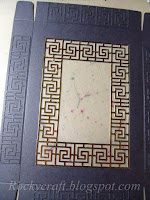 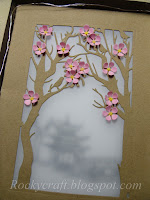 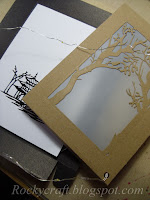 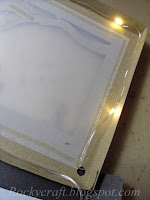 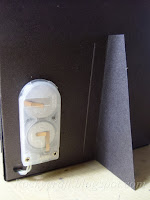 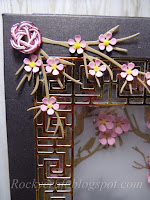 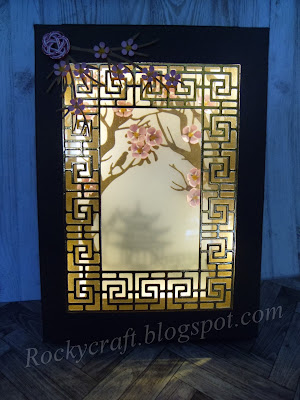 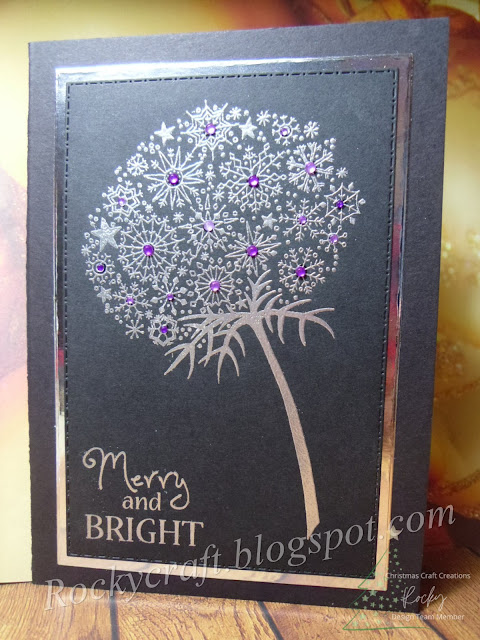 A new challenge at Christmas Craft Creations begins this week, the theme this month is 'Heat Embossing', so break out those stamps and powders. 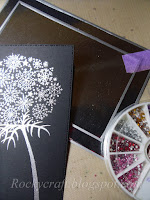 The stamp used on this card is an old Woodware one, it's one of my favourites. Stamped on black card and embossed in silver.
Black isn't usually the first choice for a Christmas card but with a pop of colour I think it makes an elegant card.
When I cut the mat layer I cut out the centre to keep for another project, it won't be seen so why not use it for something else.
The layers were all assembled before the tiny purple gems were added, I have a few friends that love purple so this card will go to one of them.
As I like making decorations for Christmas it's good to make the cards early in the year and store them, before going on to the 3D projects later on. So why not come and join us at Christmas Craft Creations with whatever seasonal project you have made using heat embossing. 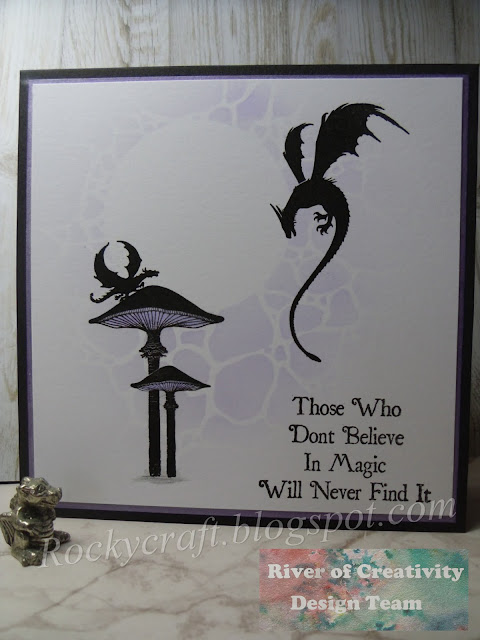 It's our second challenge at River Of Creativity, this month our theme is Parent and Child. We accept any hand crafted project as long as we can see how our theme has inspired you. 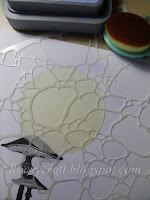 I have been watching some very inspiring videos online by Eileen Godwin, her use of stencils to give just a hint of colour to the background really caught my attention.
To begin this card I stamped the mushroom by Lavinia Stamps in Versafine black. Before getting a stamp press silhouettes were a bit problematic, but now it's so easy, if you miss a bit then stamp it again.
To make sure my moon was kept perfectly clean I die cut a circle of Stix2 masking sheet and placed it so it would appear to be behind the mushroom. 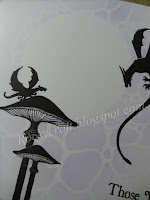 With the mask in place I used a stencil, some Distress Oxide in Lilac and a blending brush to colour my background.
I only coloured part of the area through the stencil, I kept lifting it up to peek underneath and check it was where I wanted it to be.
Once the Distress Oxide had dried off I stamped the large dragon in the air and the baby dragon sitting on top of the mushroom, looking at his Mum.
The mushroom was grounded by adding a small shadowy area at it's base with a coloured pencil. The sentiment is also a Lavinia stamp, stamped in Versafine black. 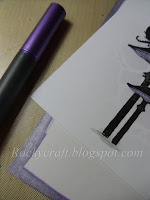 The image panel was trimmed to fit a 6x6 black card blank but it needed a tiny splash of colour to bring it all together, this was when I started searching my stash for the right piece of card or paper. After what felt like hours I gave up and used a purple pearl marker to colour the edge of a white card mat, once under the image panel it looked perfect, just a hint of purple to match the background.
River Of Creativity is not just for cards or mixed media, we would like to see any hand crafted project that fits your interpretation of our theme, please come and join us. 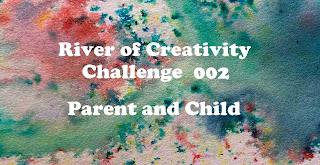 I would like to enter this card in the following challenges:
Shopping Our Stash - #446 Gnomes / Mythical Creatures
2 Crafty Critter Crazies - Anything Goes With A Critter
A Bit More Time To Craft - #141 Anything Goes
Posted by Rocky at 07:00 6 comments: 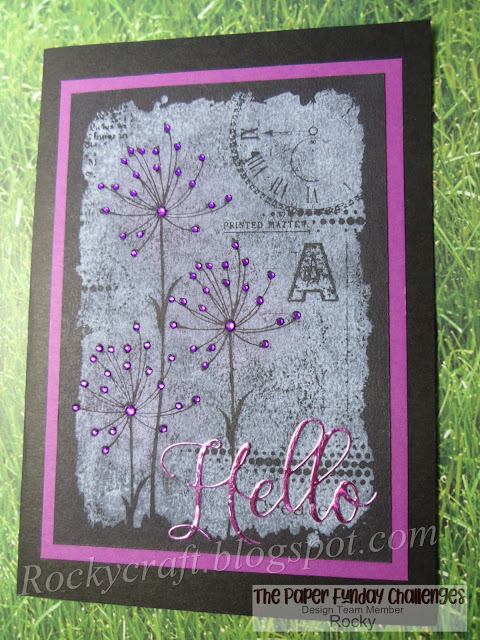 Sparkle and Shine is the optional twist at The Paper Funday this month. The stamp I used on this card is a reverse image, so the light area is Distress Oxide ink on black card. 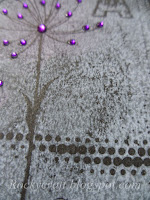 The image came out quite well but it needed a colour burst, this was achieved by putting tiny gems on the seed heads.
To make the gem colour stand out I used some cerise card to make a mat layer, the shine is added by die cutting a greeting in pink mirri card.
It was a very simple card to make, it joins the card stash for future use. The inside has been left blank so it can be used for almost any occasion, most of the cards in the box are like this so they're ready at short notice.
Please pop over and view the DT inspiration, then come and join us with your project.
I wold like to enter this card in the following challenges:
Love To Craft - #59 Anything Goes
The Crafter's Cafe - #267 Anything Goes
Posted by Rocky at 07:00 4 comments: