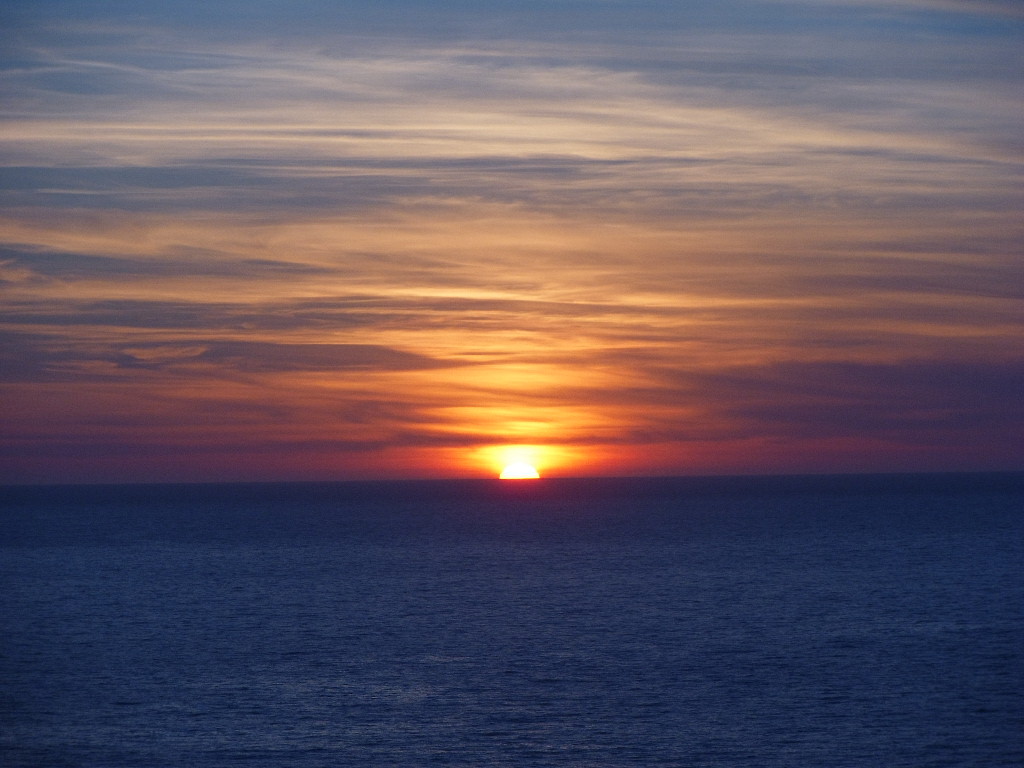 I am taking some family time for a few weeks, normal blog service should resume soon. Thank you to my Design Teamies for getting things covered for me, I'll be back shortly.
Posted by Rocky at 10:37 2 comments:

Hi, all!  It's time for an end of the term blog hop over at House of Cards and we have a super fun challenge AND tons of great prize opportunities for those of you who join in the fun!!! :)  You should have arrived here from Rudlis (Vintage) .  If you haven't, please start all the way back at the House of Cards hop post and follow the list found in the body of the hop post! 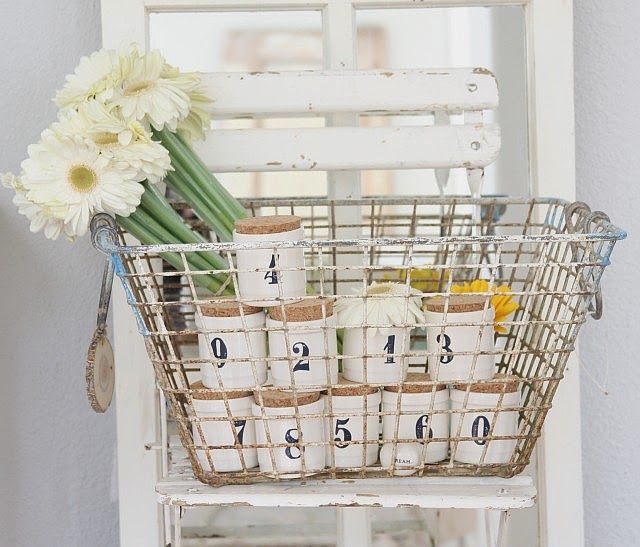 Here are our fabulous sponsors~

Inspired By Stamping
Prize: $15 gift voucher to the shop.

and here is my vintage interpretation of our lovely photograph 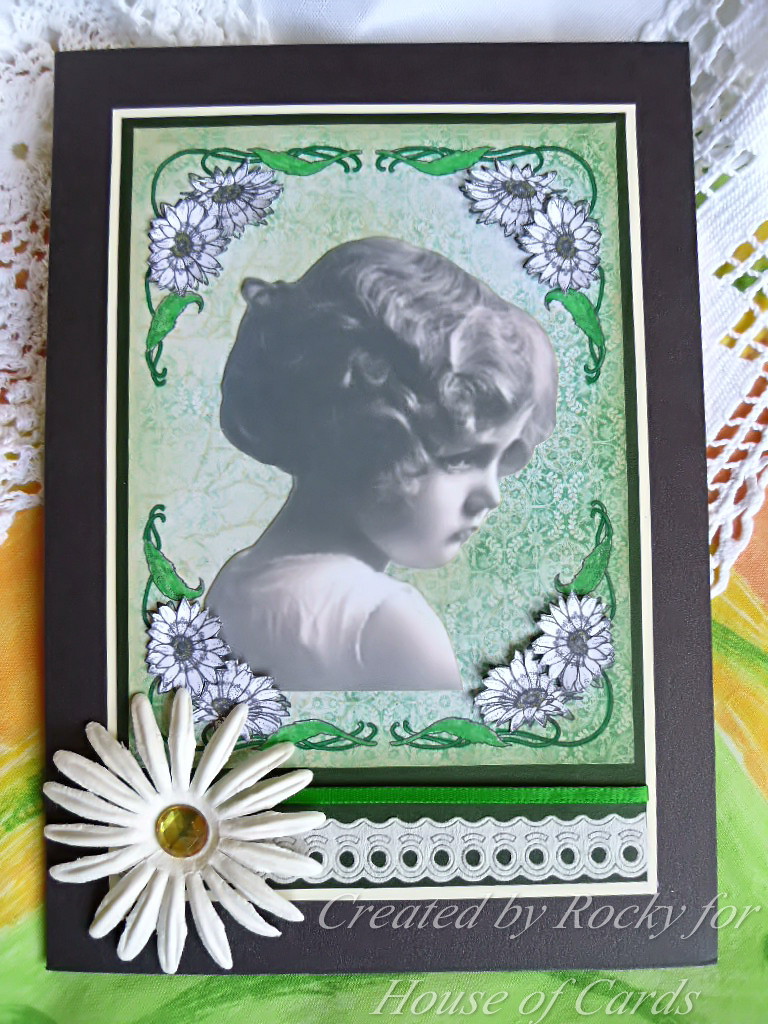 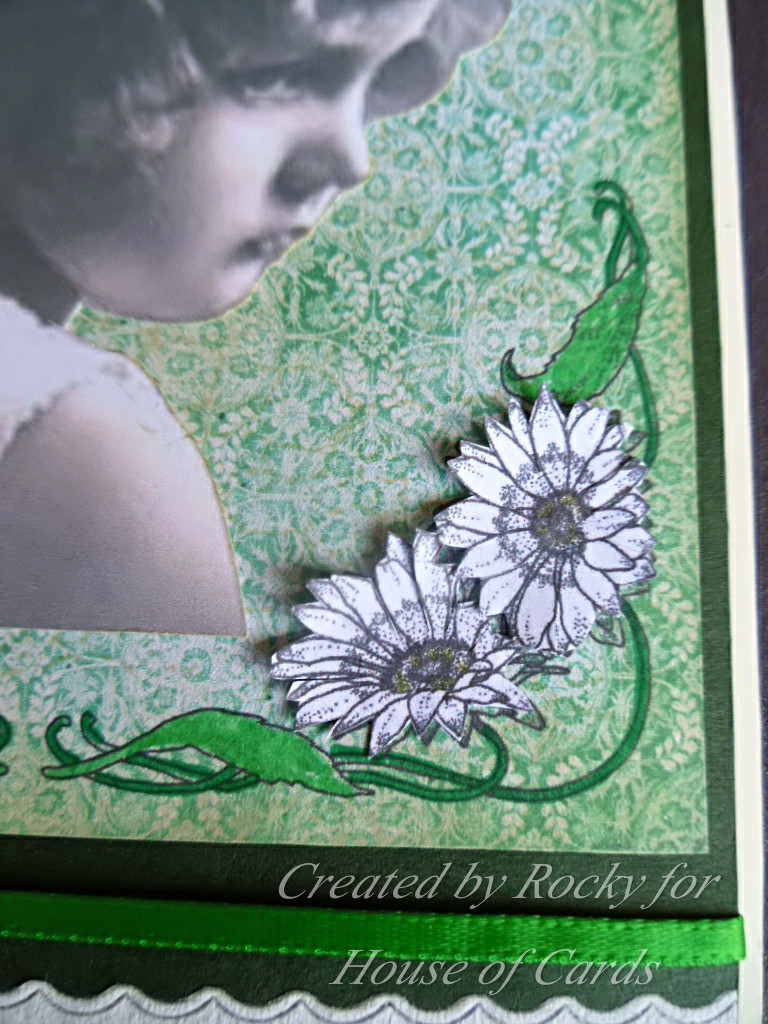 I have used some gorgeous backing paper from Eclectic Anthology called Sublime Lime and imported it into my writer program. Then I have used a digi stamp from Stitchy Bear called Black Eyed Susan Floral Corner as a png file over the top of my backing paper (png's have a transparent background so they're perfect for this type of thing).
I imported the corner then copied and flipped it to fill all four corners, sizing as required. Once happy with the look I printed this out, then I went back and removed the backing paper but left the corners and printed again. This gave me a white flower that I could cut out and layer on top of the patterned one exactly the same size. I have used a crackle background stamp and Old Paper Distress Ink to age the backing paper as well as distressing the edges with the same ink.
I have coloured the leaves and stems with markers and cut out my white flowers including small cuts between petals for dimension. Each flower is stuck on top of the background printed one with tiny gold dots in the centre which unfortunately don't show up too well in the picture.
The girl in the centre was a freebie from somewhere but I'm afraid I didn't write down where, if it's from your site then thank you, let me know and I will amend this to give you credit. She is cut out and the edges are coloured with Old Paper Distress Ink.
The image panel is mounted on a small layer of dark green paper with some paper lace and a thin green ribbon across the bottom, before being mounted on cream card and then chocolate pearl card. There is no room for a sentiment on this card so all it needed was a large white paper flower in the bottom corner and a clear gem coloured with an alcohol marker in the middle.
I hope this gives you some inspiration, even if it's just to play around with your digi stamps and see what you can do with them.

Now get to hoppin'!  Your next stop is  Debbie Marcinkiewicz  If you get lost along the way, you can always head back to the original blog hop post--and don't forget to link up a project at the House of Cards blog after completing the hop for an extra chance to win a mystery prize from one of our fabulous sponsors, too! 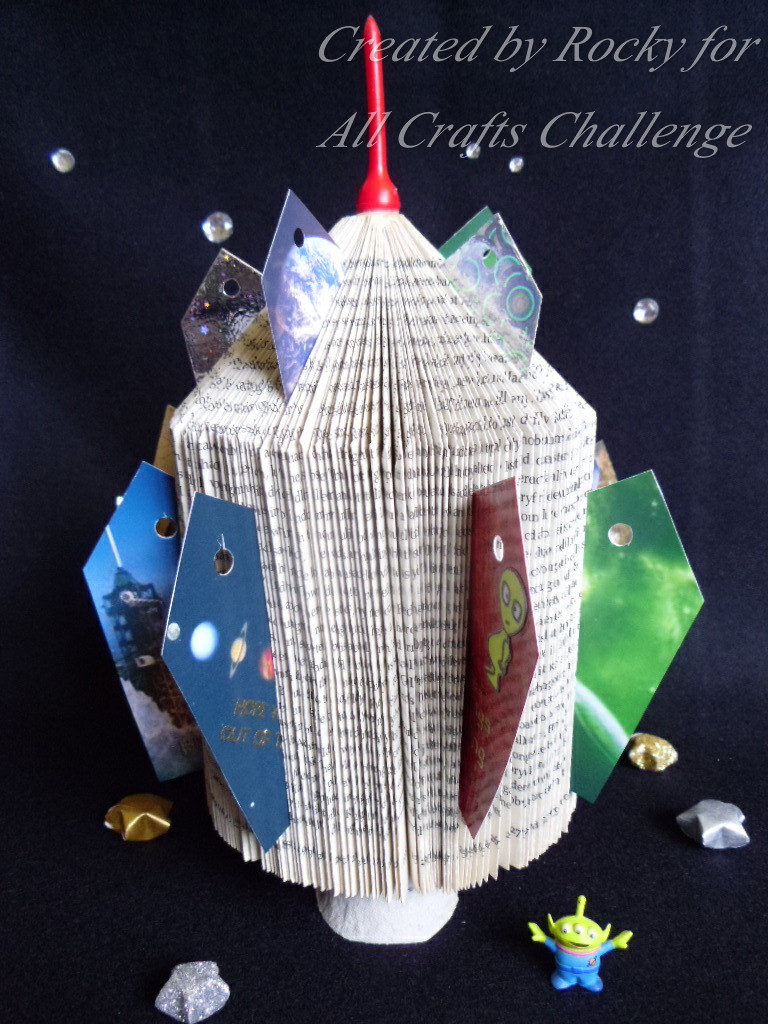 Today sees the launch of a new challenge at Craft My Life All Crafts Challenge. You can enter anything you make as long as it's NOT A CARD!
My creation this time was meant to be a hedgehog but the book I chose to fold had too many pages, as I folded it it got fatter and fatter, until it became a complete cylinder. So then the question was what could I do with a cylinder?...make a pencil?.....cut it in half to get two hedgehogs?....make a rocket!!!!
I am fascinated by space so choosing to 'bookly go' where no book has gone before was a logical conclusion.
The tip of my rocket is a plastic golf tee stuck on with Cosmic Shimmer PVA glue (well it had to be cosmic didn't it). 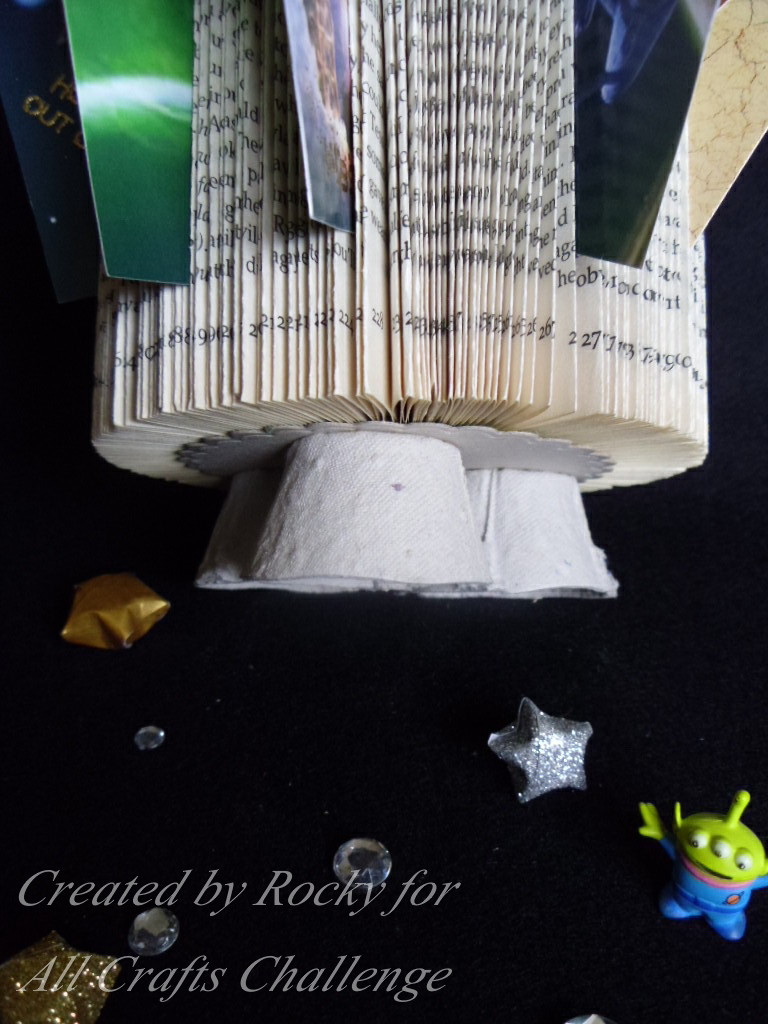 The base of the rocket is glued to a circular card panel which has three egg box cones glued to it. There are no new items used to make this apart from a couple of photos, all card has come from scraps and all bits are from stash.
Some of the tags are cut from old card backs, the stamps for the alien and wording are from an old Creative Expressions set called Outer Space. The little alien glows in the dark because I used Wow Glow In The Dark embossing powder. I stamped and gold embossed 'Beam Me Up' on the picture of the Enterprise, 'Blast Off' on the Shuttle photo and 'Greetings Earthling' on the red tag. 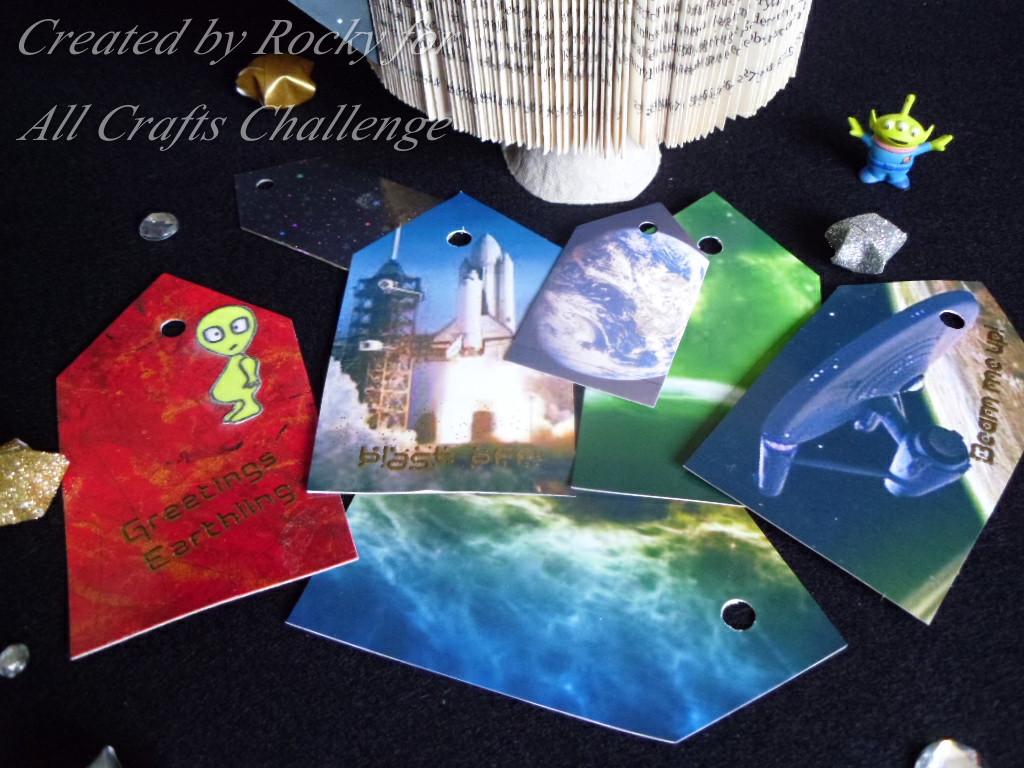 I did put rafia through the holes on the tags but it didn't look right so I have left them stringless. The back of each tag is plain white card so you can write notes on them.
This rocket could be kept on a desk or near a phone to hold all those important little personal log entries but this one won't make it to a craft sale, it will only be voyaging as far as my son's room, after all resistance is futile!


Please pop over to All Crafts Challenge and take a look at what the DT have been up to, come and join us as we'd love to see what you've made. This challenge runs for two months so you have lots of time to create.

I would like to enter this rocket in the following challenges:
Allsorts Challenge Blog - For The Guys
Crafting At The Weekend - Anything Goes
Polkadoodles - Men On Our Minds
Delightful Challenges - It's A Guy Thing
Milk Coffee Challenge - Anything BUT A Card 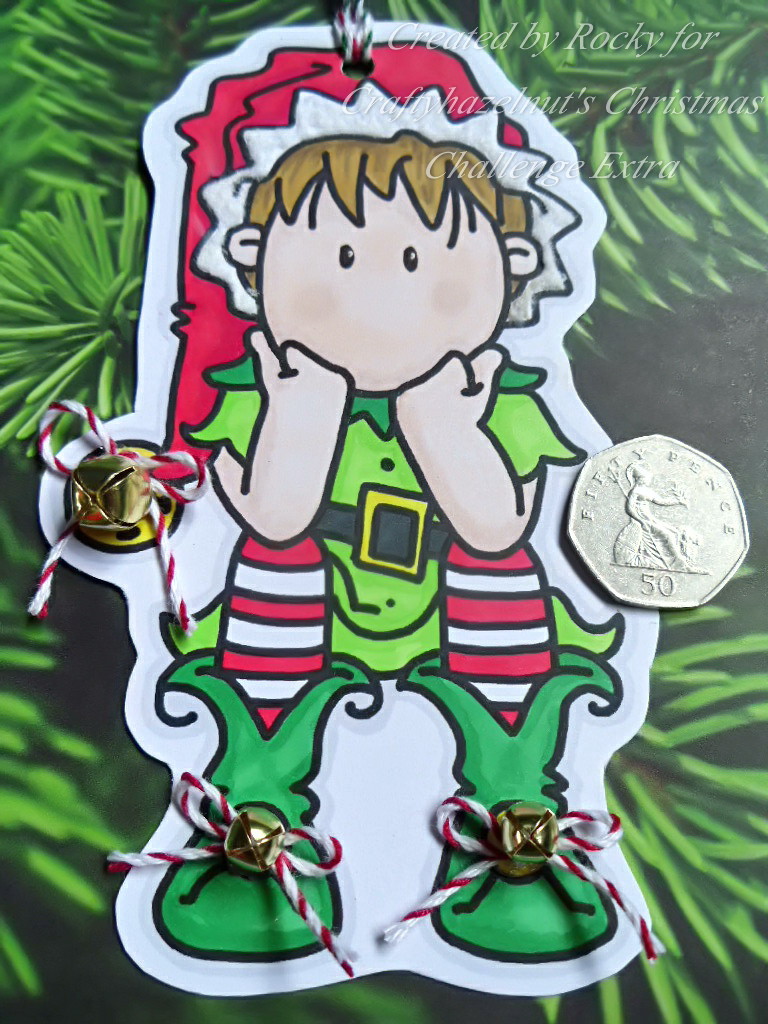 I can't believe it's June already, where is this year going?!  A new month means a new challenge at Craftyhazelnut's Christmas Challenge Extra, where anything goes as long as it's Christmas.
We are sponsored by Bugaboo Digital Stamps, I haven't used digis much before but I'm beginning to see they have far more use than just print and colour. It's not cheating to use a digi, it's a very useful resource.
I have taken this photo with a fifty pence piece to give you the idea of scale, this tag measures approximately 6.5x4 inches, making it a great gift tag size for a special present for a special person. If only you could re-size your rubber stamps to do things like this!
This little chap is Christmas Brat Boy Elf, there is a Christmas Brat Girl Elf too. I must apologise for my colouring, I need more practice but there is something quite calming about picking up some pens and just immersing yourself in colouring. 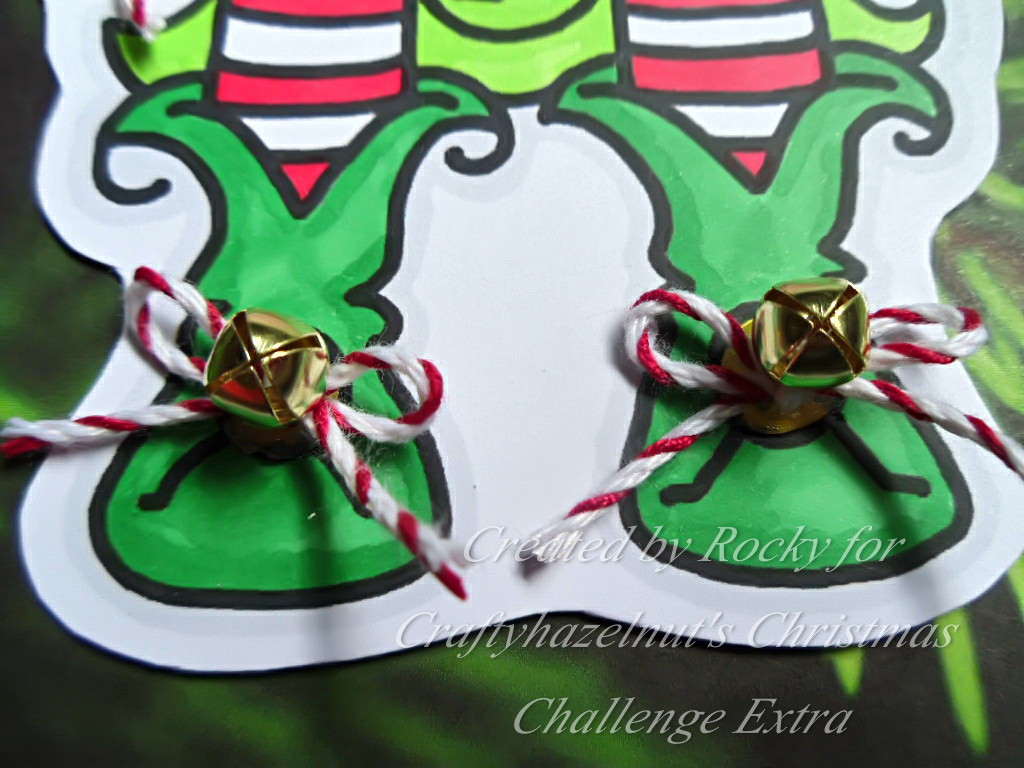 I have used some bakers twine and bells over the top of the printed bells, stuck on with silicone glue, the hat also has white flock around the edge. On the back of the tag I have stuck a printed patterned paper to cover all the pen that comes through the card when using alcohol markers. The backing was printed out on the draft option on the printer to make it very pale, then it can be written on.
Please come and join us at Craftyhazelnut's Christmas Challenge Extra with any of your Christmas creations.


I would like to enter my Brat Boy in the following challenges:
Completely Christmas - Anything Christmas
Craftyhazelnut's Christmas Challenge - 3 of something  (bells)
Christmas Stampin' All Year Long - Anything goes
Fab 'n' Funky Challenges - Christmas
Stampavie And More - Christmas In May