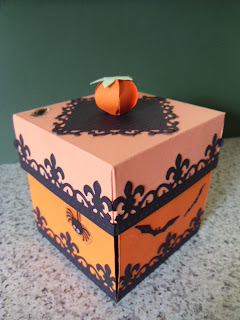 My apologies for not posting earlier, I have been preparing samples for demonstrations, classes and shows. The run up to Christmas has well and truly begun!

Also after making this sample ready for the techniques day I started to look at spiders webs more closely and discovered I had a house full of them!!! So I had to do the 'H' word...I know it's a waste of precious crafting time but you really could write your name in it!

I was given an exploding box pre cut ready to decorate, it was orange so what else could I do but Halloween. I decorated each layer prior to assembly, it's easier to handle and if an accident happens the whole box is not spoilt.

The pumpkin on the top was cut using a poinsettia die from the Marianne range. Cut one large flower and one small both in orange, then one small in green. Curve both sets of orange petals inwards to form a ball and glue together as best you can, add the little green flower to the top and this will help hold it all together.

The black base the pumpkin sits on is cut from a Spellbinder die 'Fluer De Lis Squares', this die also makes the most amazing picture frames if you cut out the middle. The Black border around the lid and base were cut from Spellbinder die 'Fluer De Lis Accents'. Don't throw any offcuts away as they are used to decorate the inside.....waste nothing.

The spiders are dome stickers I was given and the bats are cut with a Sizzix die that I borrowed (thanks Avril) as were the Ghosts and Skeletons inside.

The first layer was stamped with Chocolate Baroque stamps on the outside and a Tim Holtz stamp on the inside plus a little free hand drawing of the long studied spiders webs. This colour scheme was great to follow, black card, black ink pad and black pen plus a little acetate and some white card offcuts.

The second layer was very easy as I 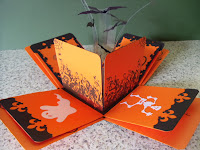 used more die cuts, the offcuts from cutting the border and a repeat pattern on the inside flaps.
The inside layers were stamped with more from the Chocolate Baroque Halloween set and the offcuts from cutting out the frames used on the lid and the inside base.
Finally I thought an exploding box should have some kind of spooky outburst and what better than bats. The bats were again cut with the Sizzix die and then stuck onto a wobbling acetate tower. The tower was made using a piece of acetate saved from the packaging of a much needed craft item, make a small, long, square tube, then cut down the length of the tube to an inch off the bottom to achieve the waving fronds. Cut these fronds at different lengths and glue a bat on each end. 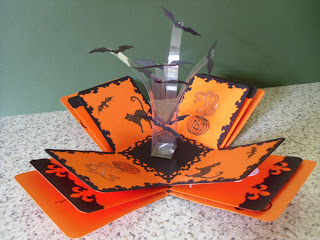 Getting the lid back on is a little tricky but well worth the effect when the box is opened.

This is just part of the techniques day and the theme for the box is optional, some are making for Christmas and some for birthdays.

Please leave me a comment to let me know what you think or if you have any questions.

I hope to post some of the samples for the Dereham demonstration soon, they're nearly finished!

Three in one stamps 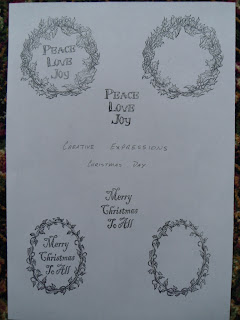 I have been playing around with my stamps to see if I can get more out of them. We are all thinking very carefully before we make new purchases so I'm trying to re-vamp what I already have, but there is always something that tempts you no matter how tight the purse strings are.
These first two stamps are from the same set by Creative Expressions - 'Christmas Day'. To begin with I cut out the complete wreath which makes a lovely stamp on its own but on taking another look at it I decided to cut out the words in the middle. This was done very carefully with a craft knife without cutting into the wreath at all. I haven't trimmed the word stamp so that I can put it back into the wreath and get a perfect fit when the whole thing is used. You will need to keep an eye on the edges of the word stamp to make sure no stray ink is picked up, if it is just gently wipe it off before you stamp. The same method was used to cut the second wreath stamp.
This now means I have two lovely wreath stamps with words inside, two word stamps I can use alone and two beautiful Christmas wreaths I can use to frame other artwork. 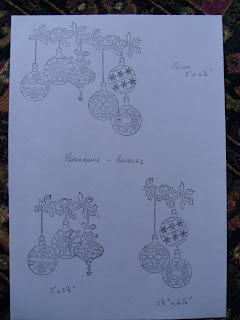 This is a clear stamp from Papermania, it's one of this years selection but I couldn't resist it. Stamped and embossed in black and coloured in with Cosmic Shimmer Drawing Inks it will look great.
It is quite a large stamp, 5"x 4 1/2" so I decided to cut mine in half. Two groups of three baubles made the cut line clear, it was then a close study of the garland to see just where to cut that. Again do not trim the cut edge as this will help you match up the two sides when you want to use the big version.
Now I have three bauble stamps, one for a large card and two that will fit an A6 card blank.

Take another look at your stamps and see if you can make more out of them. A small pair of sharp scissors and a little bit of courage to give it a go and you'll see your stash in a whole new light. If you're hesitant then try it out on an old stamp first and not your brand new purchase.