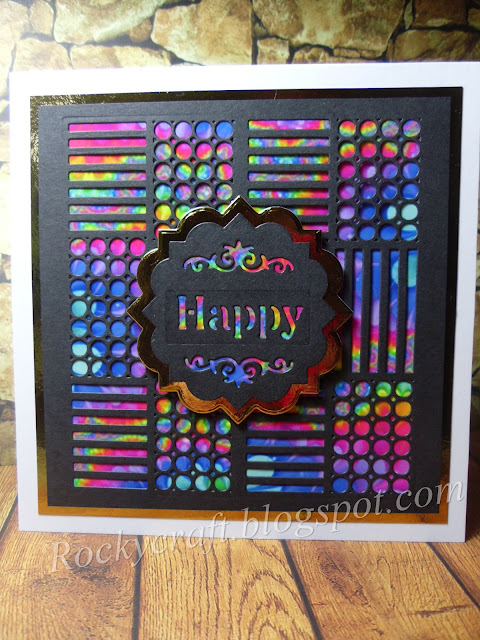 Another new die from John Next Door, this one is called Haddon. There are two panels in the set so you can build your own repeating pattern, a good unisex die, just change your colour scheme to suit. 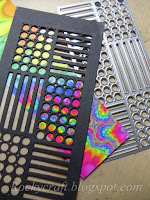 For this one I chose to use black as my main cover colour, with a psychedelic background underneath.
I cut the panel twice to make a black square, well almost square, I made it square by allowing a little more black each side of the pattern.
The background is something I found in my stash, I have no idea where I got it. I'm sure there must be something out there similar, you could make one with alcohol inks. 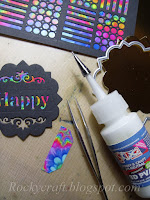 The centre panel was cut using one of the shapes from the Woodford set, then cut with one of John's word dies and a decorative die from stash.
All die cuts were then backed with the same backing card, I chose the best bits for each cut to get maximum effect.
The centre panel was then mounted on a gold mirri layer cut with another die from Woodford before going on foam in the centre of the card.
The black panel is matted on gold mirri and then on to a white card blank, the rest of the greeting will go inside the card, it may be birthday, it may end up being something else, whatever suits the occasion.
Materials List   (available from your local craft shop)JND173 - Haddon Panel die setJND172 - Woodford die set die set
JND182 - Stencil Sentiments die set
S57262 - 3D PVA Glue from Stix2
I would like to enter this card in the following challenges:
Krafty Chicks - All Occasions
Seize The Birthday - Birthday/ optional texture
Watercooler Wednesdays - Masculine
Posted by Rocky at 14:30