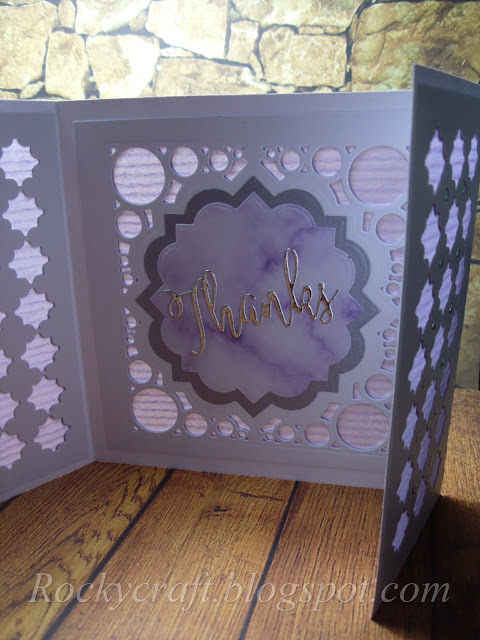 The new Reveal card die set from John Next Door has a 5inch gatefold as it's base, this goes perfectly with the Woodford die set that he released at the same time. 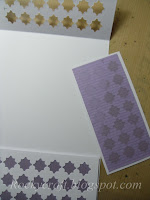 Using the the two strips of what I think looks like Moroccan tiles, I cut a pattern in the doors, I did the same to two more pieces of card ready to line my doors.
On the inside of the doors I added some lilac vellum, it has a tiny stripe in it so I had to make sure both doors matched. Once the vellum was stuck down I added the two extra panels that I had cut, making sure to line up the pattern so the light would shine through.
Although the pattern was pretty the doors looked a little plain, so I added some tiny silver holographic peel off dots from my stash. 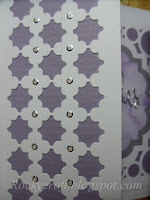 On the inside of the card I die cut the main Woodford die without any outer or inner cutting edges, just the pattern. Again I cut another panel just the same so I could sandwich some more of the vellum between them, paying special attention to the stripes in the vellum.
To mount the greeting panel I used some grey card and a piece of lilac marbled paper and two of the centre dies in the set. This shape is so pretty but would also make great masculine cards. The greeting is die cut from silver mirri so it matches the outer dots, bringing the whole card together.
It's not as fussy as it looks because the dies all line up so well, making it easy to create a pattern. On the window sill with the light behind it it looks rather nice. There will be a few more of these made for the card box, but I will leave the greeting until it's needed, it's always good to have a few cards put by.
Materials List   (available from your local craft shop)JND170 - Reveal Card die setJND172 - Woodford die set
S57262 - 3D PVA Glue from Stix2
I would like to enter this card in the following challenges:
UnstampaBelles - Thank you  Mum gave me my first creative inspiration
All Fun Challenges - Anything Goes
Dream Valley - More Than One Fold
Lemon Shortbread - Anything Goes
Posted by Rocky at 16:30