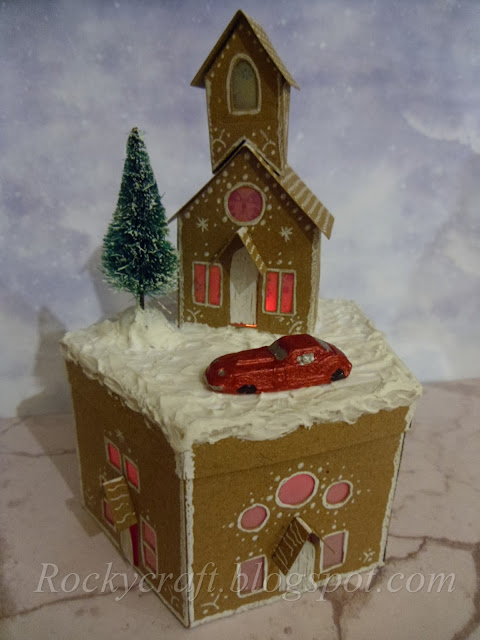 The theme this month at Christmas Craft Creations is Anything BUT A Card. I love making decorations and with the arrival of the new Paper Village die set by Tim Holtz and an idea I saw on FB, this is what I've come up with. 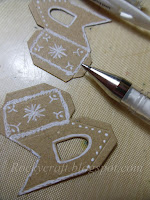 Believe it or not this whole box and the church was cut from one A4 sheet of brown card, it took a little bit of planning but it means everything matches.
I used one of the skinny houses to make the tower on the church, if you lay the house die on top of the tiny house cut out you can work out the pitch of the roof so it will fit.
To make it look like a gingerbread village I used a white gel pen to add decoration all over, though the doors were coloured with a white Sharpie to get better coverage. 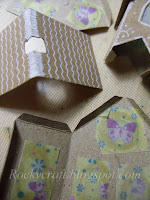 A church should have stained glass windows so I used some patterned vellum stuck on the inside of each opening, it was stuck on the wrong way around so the strong colour is on the inside. I cut a hole in the roof so the light could shine through into the tower.
To get the roof tiles even I used the deckle edge of a piece of card like a ruler. It was all stuck together with a good strong PVA glue which gave me a little wiggle room to get my edges right. 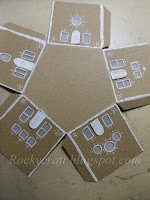 The base of the box was die cut with all the variations available in the die set for windows and doors, I tried to make every house different.
I used some plain vellum for the windows in the village and decorated it all with the gel pen.
At first the houses weren't going to have a porch roof but it didn't look quite right so they were all added later. 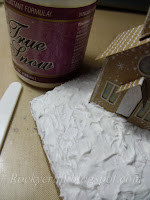 The lid of the box had a white cover added to the brown so I only had to colour the edges with the gel pen. There was a hole cut in the lid so the light from the box would shine into the church.
The church was glued onto the lid but it lacked something......snow!  Using some True Snow paste I added this and it looked so much better, it also hid any gaps around the base of the church that the light might shine through.
I added a small tree to the scene and buried it in the snow because it had a tiny wooden base that needed to be hidden.

I wanted a small car to add to the scene, where on earth was I going to find one small enough?...cake topper?...toy car?....Monopoly piece!  Not wanting to use the only Monopoly car I have I decided to make my own silicone mould so I could have a whole fleet of cars.
Making a mould is quite easy, silicone glue, cornflour, a few drops of baby oil and a spritz of paint for colour. Push the car into the 'dough' and leave overnight to set. Remove the car and then use hot glue in the mould to make many more. The advantage of this is the glue card had a flat bottom, making it easy to stick in the snow. The car was coloured with a mix of Sharpie pens and acrylic paint. 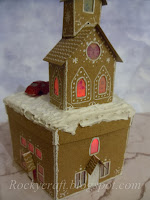 It was important that the back look just as good as the front so the whole thing has been decorated all the way round to look the same. Even the rear windows of the church are stained glass.
The light source is a colour changing LED tea light placed in the bottom of the box. I did try a string of tiny LED lights but all together they were too bright, I rather like the changing colours too.
This Paper Village is so cute, it's going to be used over and over for years, you have been warned! 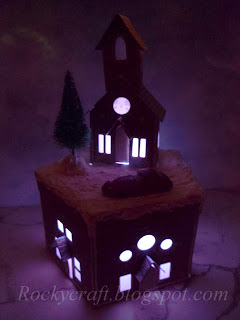 I would like to enter this project in the following challenges:
Fezziwigs Festive Frolics - Anything BUT A Card    Top pick
Creative Craft Cottage - Christmas/Winter
Country View Crafts - Anything BUT A Card
Dragonfly Dreams - Christmas/Winter
Jingle Belles - Include A see Through Element - windows
ABC Christmas - W - Winter Wonderland/ X - eXtra Special   Top 5
Posted by Rocky at 08:00