Stamping With A Die 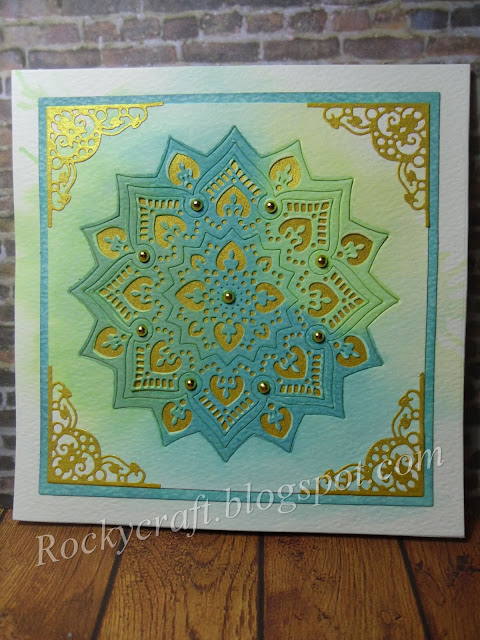 How do you stamp with a die? Use the die to cut a funky foam shape and stamp with that. This card was made using the latest mandala die set from John Next Door - JND243 Belgravia Mandala. 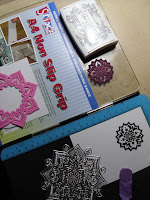 Using the die as a complete set I cut some funky foam, it's around 1mm thick so it cuts very well.
Once cut and all the tiny bits were removed I covered the back with strips of double sided tape and mounted it on a circle of Stix2 Non Slip Grip. This grip was originally sold for putting on your rule to stop it slipping when measuring, but it has a fantastic 'cling' ability. There is no adhesive on this product, it just clings to a smooth surface, which means it clings to the stamp press perfectly. 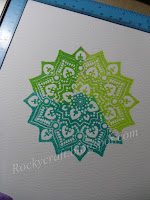 For the first stamping I used Distress Oxides, the ink sits on the foam quite happily without the need to prime the foam first.
Watercolour card was best for this as the next step was to spritz it with water and allow the colours to run. 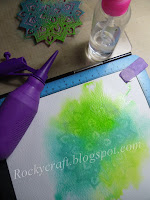 To encourage the flow of colour across the card I used a hand operated air brush type gadget, it's sold for use with marker pens but without a pen it's a great way of puffing air where you want it. 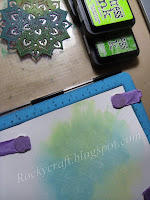 After the first layer was dry I selected the same colours but in Distress Ink this time. I dabbed the foam with a paper towel to remove any excess Oxide before adding the Ink to avoid any possible issues.
The beauty of using a stamp press is having the ability to stamp in exactly the same place again, so that is just what I did, having made sure to add the colours in the same places on the foam stamp. 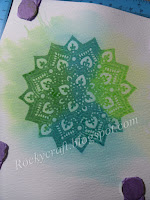 With the Ink stamped over the Oxide it now looked like the one image had bled but without loosing any definition.
The next step, once dry, was to cut the image out with a large square die. With another slightly larger square die I cut an outer layer to be used in the mat and layer process. 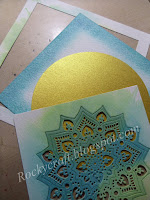 With the die set still taped together from cutting the foam I cut the stamped panel to get all those lovely little gaps to drop out.
I had to be careful to keep the various pieces of the mandala together and the right way around in the square while poking out the tiny bits.
I taped the layers together on the back to make it easier to stick down over a gold pearl circle, this gave me a warm shimmer of gold through all those beautiful gaps, it reminded me of a peacock tail. 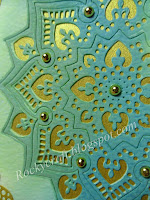 I wanted a mat layer but nothing I had was just right, so out came the Oxides and Inks again, this time to go around the edge of a white mat layer to tone it in with the image panel. This layer was just large enough to cover the whole left in the big square, then all I had to do was match up the colours and stick this on top of the large square. It all sounds complicated but it really wasn't, if it had been it would probably have ended up in the recycle box!
A few small gold pearls added around the mandala lifted the image panel and the addition of four corners cut from the same gold pearl card finished it off. With the pattern and the gold I didn't feel it needed a greeting on the front, that will have to go inside when required.
I would like to enter this card in the following challenges:
Lil Patch of Crafty Friends - #168 Anything Goes
A Bit More Time To Craft - #146 Anything Goes
Creative Fingers - #218 Anything Goes
Love To Craft - #64 Anything Goes
Crafts Galore Encore - #93 Anything Goes
A Perfect Time To Craft - #11 Anything Goes
The Creative Crafters - #45 Anything Goes
The Crafters Cafe - #277 Anything Goes
Posted by Rocky at 16:30