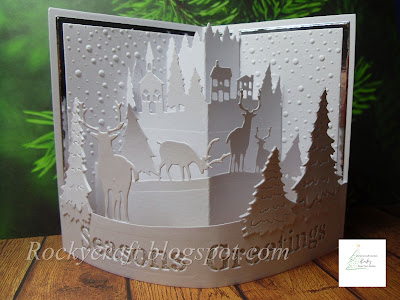 Another new challenge this month, Christmas Craft Creations is all about a Fun Fold for November. I have used John Next Doors pop out card again, but this time with four layers. 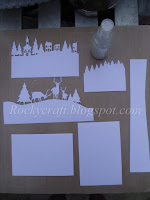 The die set comes with dies for three layers of 'pop' but I wanted to use four for a better balance on two rows of deer.
I cut the base card and the top mat layers, then embossed the top layers with a snowfall folder. The only colour in this is the silver mat layer between the snowfall and the card, with a tiny bit of silver glitter card behind the greeting which was die cut into the front band.
I prefer to cut the scenic bits into white card and then cut the folding layers, it takes a tiny bit of planning but it means very little has to be stuck on as it's all one piece of card. 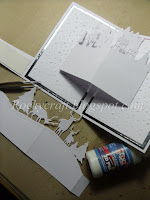 The top layer is trees, nice and simple. The second is a town skyline, also pretty easy as it's about the same length as the layer.
The third was positioned so that the deer's body wouldn't be on a fold, I then measured how long it would need to be to fit the card and trimmed it accordingly.
The final layer is the band across the front, this had the greeting cut into it, then it was backed with some silver glitter card. Three trees were die cut and stuck onto the front of the band and one lone stag was cut and stuck onto the back of the band so he looks like he's standing in the snow.
Adding another layer to the pop out design wasn't hard, it just took a bit of measuring to get it right. I could have avoided adding this layer if I had stayed with the three and placed the inside two a little lower but I enjoyed the challenge of seeing if I could do it. 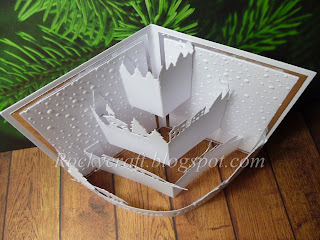 Please pop over to Christmas Craft Creations and join us with your Fun Folds, remember if you wish to be included in our vote you do need to display our badge.