Pick Up A Pine Tree 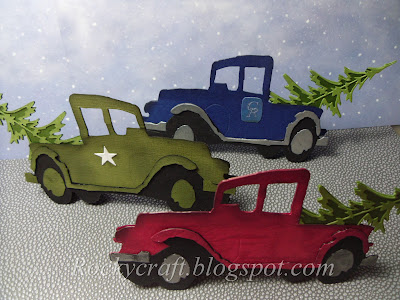 Sadly this will be the last challenge at Not Just Cards, it has been running since 2014 but now it's time to hang up the scissors, thank you Helen for the last 6 years.
Making Christmas projects is one of my favourite things to do at any time of year, especially when I can make something tailored to the recipient. I have one friend that owns a few WWII American military vehicles and another that owns a haulage firm, so this was a perfect way to make something for them. 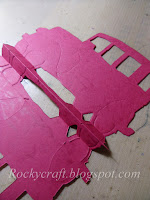 I started with the Sizzix Bigz die by Tim Holtz called Old Jalopy and an A5 piece of card folded in half. Either side of the centre fold I added another fold to make a pleat, this was in one of Tim's many demo's, I'm sorry to say I don't know which one.
When I put the card on the die I made sure that the pleat was just above the cutting edge at the bottom of the wheels, it didn't matter having a flat at this stage as tires would be added later. 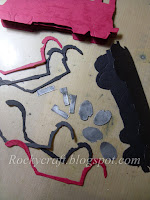 I also cut six wing pieces, two in red to match the car and four in black. I stuck two black together and then a red one on top to make them stand out, trying to get foam tape this thin would have been a nightmare!
The hub caps and bumpers were also cut in black card, then they were coloured with silver guilding wax but not with a perfect cover as they are vintage vehicles and need to show wear and tear.....vintage will hide any tiny mishaps too. 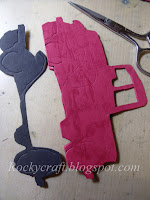 The lower part of the car was cut in black card, this forms the tires and shading under the wings, it was trimmed down to fit below the wings and running board. I cut the back of the car off to make it into a pick up.
These vehicles are double sided so both sides have been decorated, when gluing the various bits on to the car remember that they will be the other way around on the back.
The trees are also a TH die, cut in light green card, stuck onto a darker green card and then fussy cut. Again these are double sided so the tree outline on the back had to be stuck on back to front. 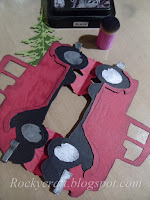 With all the car parts stuck on and the tree loaded in to the back of the pick up it was time to stick both sides together but only at the top. I ran a small line of glue along the bonnet, across the cab and then along the top of the buck.
If you stick the whole card together it will not stand up, having the ability to open at the bottom helps the pleat become the stand for the pick up.
To make the military truck I used a suitable green card for almost everything except the tires and added a small white star to the door. Both the red and the military trucks have been aged with a dusting of black Distress Ink.
For the blue truck I used blue card and silver satin mirri card for the wings, hub caps and bumpers, the Chris Riches fleet are always spotless with gleaming chrome accessories and at night they light up like a Christmas tree. The logo on the door was taken from a photo as my drawing skills were not up to copying it accurately.
There is little space to write anything as they are not really a card, so I will be adding a small tag to the tree with my Christmas message. I hope that these will come out again next year as a simple decoration, I have kept several stand up items, both commercial and handcrafted, over the years because they have been too nice to throw out.
I would like to enter this project in the following challenges:
Christmas Cards All Year 'Round - Not A Card    Top Pick
Winter Wonderland - Anything Christmas
Merry Little Christmas - Anything Christmas
613 Avenue Create - Anything Goes/optional Vintage
Ike's World - #139 X is for Christmas
Dream Valley - Christmas
Use Your Stuff - Winter/Snow/Christmas
The Paper Funday - Anything Goes/option Christmas
Posted by Rocky at 09:00