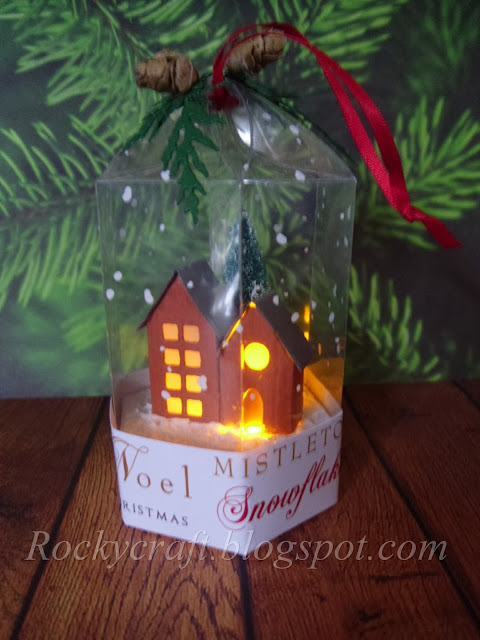 A few weeks ago I made a Winter scene using the Large Lantern die set by John Next Door, this time I've made one using the Small Lantern. The standard Small Lantern is about 3.5inches tall when assembled, making it perfect for hanging on the Christmas tree. 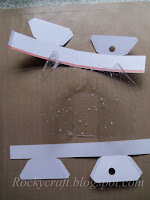 This lantern is a little taller than 3.5" because it's been modified to hold an LED tea light in the base.
I cut the main body in snowfall acetate and cut the bottom off. Then I cut two pieces in white card, both have the base but one has a slightly taller side than the other.
Both base sections have a small hole cut in them, one for the candle flame to poke through and one for access to the switch on the candle. 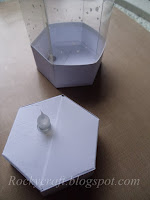 The acetate was stuck on the inside of the taller base section, then the lantern was assembled. You must use something like redline tape for this, it's the only thing strong enough to hold the construction together.
The slightly shallower base has the candle stuck inside with the flame poking out, this section will be pushed down into the lantern once decorated. 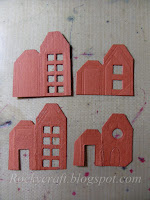 The little houses are a Sizzix die by Tim Holtz called Paper Houses, I used the smallest one and cut it down in height to suit.
I made sure there were plenty of windows in these tiny houses for the light to shine out. The windows then had small pieces of vellum stuck on the inside to mute the glow and make sure you can't see he flame. There is also a small gap cut between the two adjoining houses for the light to pass through
The rooves are not covered with snow for two reasons...one is I didn't want to mess it up and the second is their insulation is terrible so it's all melted! 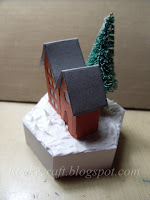 The houses and a tree were stuck onto the base, making sure the flame was inside the buildings, then it was covered with a thin layer of True Snow paste.
Once all this was dry and set hard I lowered the base into the lantern, this was sticky as it was a tight fit. I also had to make sure that I got the switch in the right place, over the hole in the bottom of the lantern.
To finish off I threaded a thin red ribbon through the holes in the top and drew it all together, I left this ribbon long so it can be used to hang the lantern. A few die cut Aster leaves and some tiny pinecones finished off the top and a wide strip of patterned paper around the base completed the project. 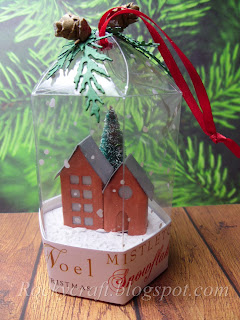