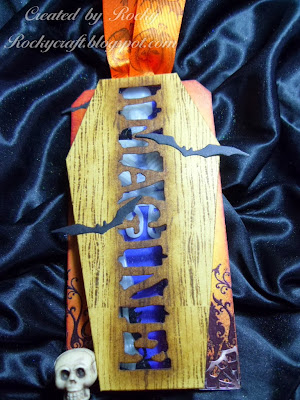 I think it's the combination of black and orange that has got me hooked on Halloween, after all it's not really something we do that much in the UK, but it is fun to create something quite different from the norm.
This didn't start out the way it's ended up, it was always going to be a tag but when I found some Halloween confetti I got carried away with the whole shaker idea, then I found a glow-in-the-dark skeleton and the rest, as they say, is history.
The tag has been coloured with Distress Inks in Scattered Straw, Wild Honey, Rusty Hinge and Aged Mahogany. Then stamped with a Tim Holtz image from his Rockstar set using Lava Black embossing powder from Creative Expressions, it's black with a hint of dark red. 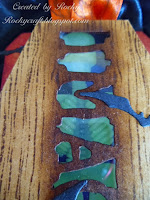 The coffin is cut from light brown card using a template from a treat box left over from last year, I had to make it a little bigger to fit my skeleton inside (still had to trim his toes back though!). Rather than fight with foam tape I chose to make a shallow box which will contain all the spiders and beads inside. Before folding the box up I used an Alterations die to cut the word 'Imagine' in the front, then I coloured it with Faded Corduroy ink and stamped it with a woodgrain stamp in Gathered Twigs. The back of the box is purple card to show off the skeleton and his crawling friend, I have added a few caviar beads to the confetti to help it keep moving when shaken. 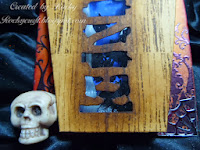 The tag is finished off with a few bats die cut with my friends die (thanks Avril), a cobweb from the same confetti pack and a skull from a necklace I found in my local charity shop. The orange ribbon has been stamped with Chocolate Baroque pumpkins and bats in Stazon. Thanks to the position of the skull the tag will actually stand up.

I would like to say Hello and Thank you to all of you for the lovely comments you leave and a big Hi to my followers old and new.