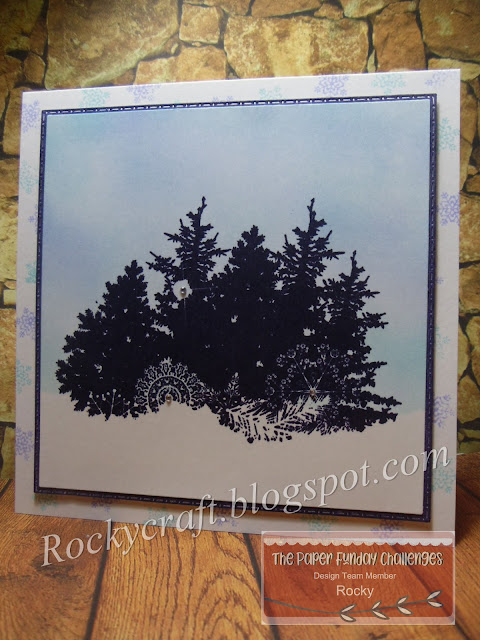 As we're still in Winter in the northern hemisphere the new challenge twist at The Paper Funday is Winter Landscapes. A Winter birthday or getting ahead for Christmas, this card could be either, a sentiment will be added later. 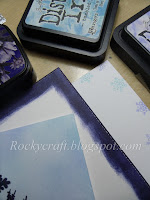 It started as an A5 piece of white card, using a torn edge piece of paper as a mask I coloured the top two thirds with pale Distress Inks, Broken China and Faded Lilac.
Working on an A5 piece gave me the advantage of choosing which bit I liked best when it came to placing the stamp. The image was stamped in Versafine Claire Medieval Blue, it's a really dark blue that looks almost black, a good way to get a dark image that's not too harsh. 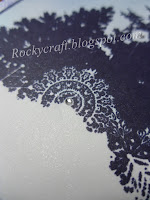 Using a square die I cut the image panel out, then cut a white mat layer that was coloured with the Versafine ink so it would match the image. I gave the whole panel a spritz with a pearl mica spray before adding it to the blue mat layer.
When put on a white card blank it looked a little plain, so I used some tiny finger stamps and added little snowflakes at random all around the edges that would show. The image panel is mounted on thin foam tape to give a tiny bit of lift.
Once mounted and dry I added some tiny clear gems to the image, two on the snowflakes and one on the glint through the trees.
Please come and join us at The Paper Funday, it is an anything goes challenge, I have chosen to use the twist but you don't have to.
I would like to enter this card in the following challenges:
Stamping Sensations - Anything Goes, option Add A Die
Sparkles Christmas - A Winter's Scene
Taylormade Cards 4 U - Anything goes, option Winter Vibes
Friendship - Winter Is Here
Pearly Sparkles - #69 January Blues
Posted by Rocky at 07:00