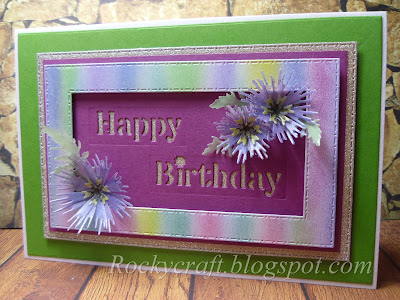 This card was made using the cut out frame left over from the card in the last post. If you haven't seen it then this was white card that has been coloured with the new Mica Magic Spring set from John Next Door. 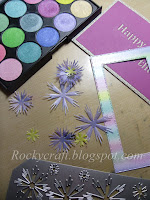 Mica Magic doesn't just colour card, it will work on many different surfaces, including vellum. The flowers were cut in vellum using the Cornflower die set and the corresponding leaves. Both flowers and leaves were coloured with the mica, for a stronger colour work on the front and for a paler colour work on the back of the vellum.
To mount up on a white card blank I used some bright green card that was a close match to one of the mica colours. On top of this I used some pink Craft Artist glitter card covered with a die cut layer of a sort of squashed berry colour, again similar to one of the mica colours used. The berry and glitter layer was mounted on 1mm foam while the rainbow frame was mounted on 2mm foam tape over the berry card leaving a border showing.
Once the frame was in place I was able to add the flowers and leaves to pop out from within the frame, filling in the open areas on the berry card.
This card has used up some offcuts and a few new bits, it's a good way to make great use of what you've already got on your work bench from previous projects. 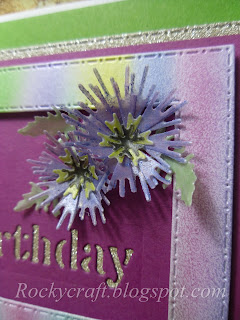