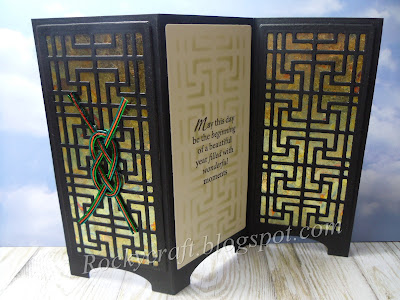 Another card made with a die from John Next Door's new Art Deco collection, Kramer. The sentiment on this one makes it perfect to use in wishing you all a Happy Crafting New Year, let's hope we can return to workshops and shows soon. 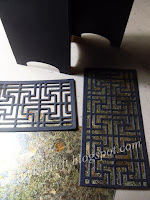 Using thick black card I cut the screen using John's latest Lantern die, I think it makes a great screen card because the feet just look right for it.
With the Kramer die I cut two panels in the same black card and trimmed them down to fit the screen panels.
To back these patterned panels I used a piece of thin card that had been covered with a d/s sticky sheet and then covered with guilding flakes. I've had these flakes for years, they're gorgeous but I can't 'save' everything.....it's time to use them. 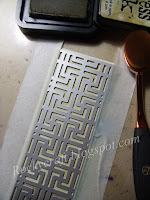 For the centre panel I wanted to add my sentiment but plain cream card looked wrong, so out came the Distress Ink and a blending brush. Using the die as a stencil I coloured the cream card with the same pattern as the panels but left it pale enough to see the stamping.
I cut the cream card panel to be the same size as the others and stuck it on the screen card. 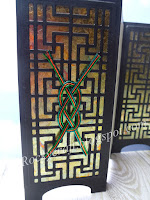 The card looked good but not quite right, it was missing a focal point on the front. I searched through all my Mizuhiki cords to find colours that would go with the guilding flakes, stand out, but not too much. Finally settling on a mix of green, teal and copper, which can all be found in the flakes.
The knots are simple but effective on oriental cards, adding a small touch of authenticity.
I hope next year sees us all return to sharing ideas and techniques in person, Happy New Year.
I would like to enter this card in the following challenges:
Creative Creases - #22 Use A Fun Fold
Time Out - #204 New
Modsquad - New.....include something new
Posted by Rocky at 16:00