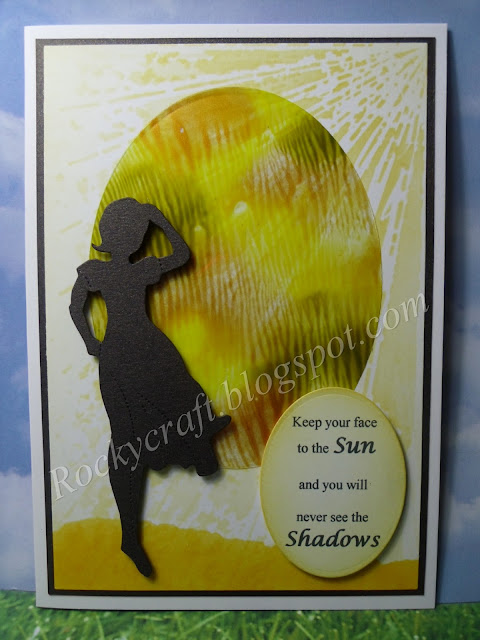 The theme at River Of Creativity this month is sunshine, this challenge blog is not just for mixed media and cards, it is for ANY craft. If you have made it and it fits our theme we would love to see it. 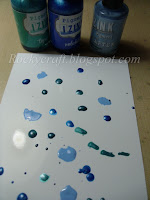 Both of these card started with I-Zink pigment inks and some acetate. The ink was dropped onto one piece of acetate, then covered with another piece of acetate and squished together.
Before the ink could dry the two pieces were pulled apart, this is what gave it the steaky patterns. It was then set aside to dry, which didn't take very long. I made several different sheets using other colours and put them in my stash box, after all if you're going to get all the products out you may as well turn it into a full creative session. 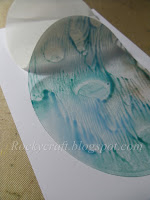 The best way I have found to stick these panels down is to put the decorated acetate on to a sheet of double sided sticky film, then you get no glue marks because it's sticky all over.
These acetate panels were die cut after the sticky was added, using Tonic nesting ovals. I also discovered it was best to stick down one end of the panel and gently peel off the backing, smoothing it down as I went. It helped keep it aligned and made sure I got no air bubbles under the acetate. If you do get an air bubble you can pierce the card from behind with a pin, just make sure you don't go all the way through the acetate aswell. 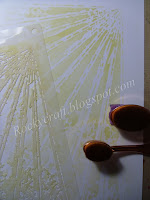 For the rain man the acetate was stuck onto a sheet of white card, then decorated with Distress Ink and spritzed to get the rain drops.
For the sunshine lady I used a stencil and Distress Ink to create the rays of the sun before sticking down the acetate. The stencil wasn't quite large enough to cover the card completely so I inked the main part and then moved the stencil around to enlarge the area.
A mixture of Scattered Straw and a dash of Fossilised Amber created the desired effect. For each card the character was going to need to be grounded, this was done by using a piece of torn paper and the same Distress Inks used for the backgrounds. 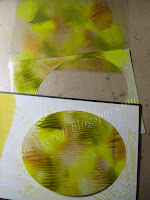 The two characters are cut using metal rule dies, one Sizzix and one unknown. The rain man was cut in very dark blue and the lady was cut in a pearly dark brown, each image panel has been matted on the same card as the character.
The sayings were found on line, typed out and printed off. I don't know who Rain Man's saying comes from but the Sunshine Lady is by Helen Keller. Both sayings were die cut oval to match the acetate panel and ink blended to match the backgrounds. Both characters and sayings are mounted on foam, sayings on 1mm thick and characters on 2mm thick.
The two cards were made several months apart as it took me a while to find a suitable lady for the sunshine card. Now they're complete I rather like them as a set, they may just end up being framed and kept rather than gifted as cards, although each acetate panel has a double so maybe it's a good reason to make some more. 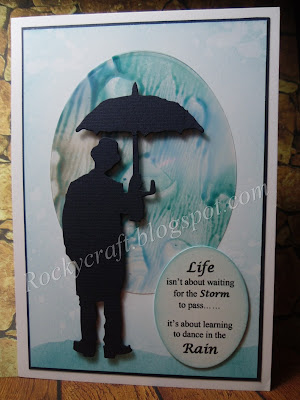 Don't forget that River Of Creativity is a new challenge that accepts ALL forms of craft, as long as we can see how the theme has inspired you any project is welcome.
I would like to enter these cards in the following challenges:
Path To Positivity - #91 optional - change your environment (frame as pictures)
Use Your Stuff - #422 Use A Stencil
Crafty Calendar - Masculine
The Creative Crafters - #40 Anything Goes
Love To Craft - #58 Anything Goes
Let's Craft and Create - #171 Anything Goes + No Patterned Paper
Happy Little Stampers - Anything Goes With Dies
Dies R Us - #169 Anything Goes using stock a die
A Bit More Time To Craft - #140 Anything Goes
613 Avenue Create - #5 Anything Goes / optional mood board
Posted by Rocky at 16:00