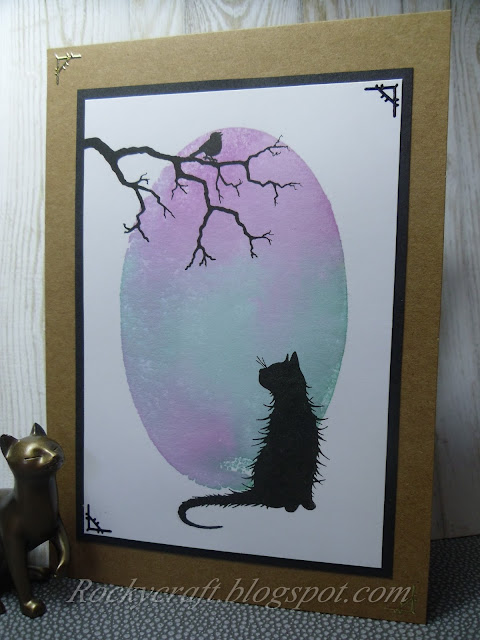 Having made so many cards with the gorgeous splat stamp I thought I'd try and get the same, or at least similar, effect with a media plate. I discovered two big differences, one is the obvious crisp edge of a media plate is nothing like the random edge of a splat and two is the less obvious type of acrylic that the plates are made of.
Inks on the media plate tend to pool in small blobs unlike the splat but all is not lost. By adding a layer of Versamark on the media plate to begin with the inks bobble much less and a very similar effect to the splat can be achieved. The other thing to remember is that while the splat holds moisture well, the media plate does not, so only spritz the inks once or twice at most. 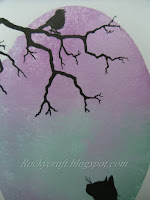 So for this card the Versamark was applied to the media plate once placed in the stamp platform, then a layer of Distress Oxide Inks. A minimal spritz of water to get the inks moving and then the platform was shut on to the card. As previously mentioned it is sometimes best to shut the card onto the stamp so the ink doesn't run off the media plate or stamp.
The water used on this card had some pearl mica in it so there is a subtle sparkle to the stamped media plate shape, unfortunately it doesn't show up well in this picture.
These backgrounds are so pretty in there own right, they need very little else to go with them so silhouettes are perfect. I have several cards to make for next month which means the cats are most definitely out of the bag.
A simple black mat layer was enough to make the stamping stand out but when I tried it on a white card blank the image panel seemed to fade, the answer was to use a Kraft card blank which keeps the image panel as the focal point. A tiny addition in the corners seemed to finish it off completely. There is no greeting on the front as I didn't want to take away from the image.

I would like to enter this card in the following challenges:
Show Us Your Pussycats -  Furrything Goes
613 Avenue Create - Anything Goes/ optional Use A Critter
Sparkles Monthly - Include An Animal