A Touch Of The Jackson Pollocks 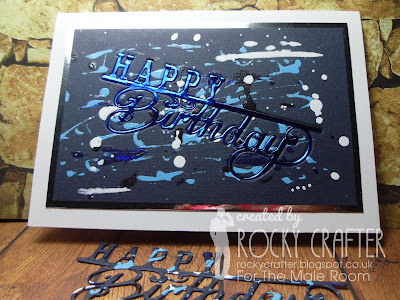 The new challenge at The Male Room is to make a masculine project inspired by a famous artist, I thought something on a Jackson Pollock theme would be fun to make.....and it was! 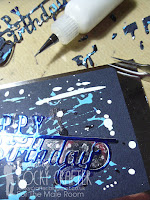 I started with some dark blue card, then I flicked paint at it until it looked like a decorators boot.
With such a busy background I had to think of something simple for the image or sentiment, a die cut seemed the way to go. This turned out to be a bit more complicated than I planned, I hadn't realised the die I chose had so many tiny cut outs. Trying to put all the cut away pieces back onto the silver mirri was a nightmare, even using the die as a guide. 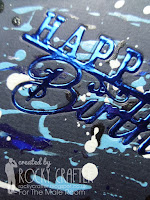 The only thing for it was to die cut another sentiment, stick that in place and then add all the little cut away bits. Most of them were easy to work out but once I accidentally mixed the bits up it became a bit more of a puzzle.
Eventually it all came together and the blue mirri sentiment looks at home tucked into the splatter background.
Please pop over to The Male Room blog to see some of the amazing inspiration the DT have come up with, I can honestly say this challenge stretched my imagination. 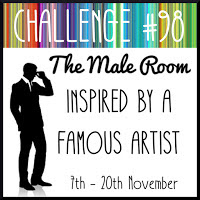 I would like to enter this card in the following challenges:
Unicorn - Use a Sentiment
Crafty Cardmakers - Explosion Of Colour  (I got the expolsion bit right!)
Dream Valley - Use Dies and Punches
Simon Says Stamp (Monday) - Make Your Own Background