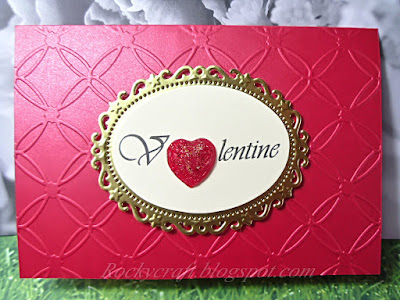 Pearl card always looks great when embossed, so as my card was red I decided to make a Valentine card.  Only the front is embossed, I put the front in the folder and left the back hanging out so it stayed smooth. 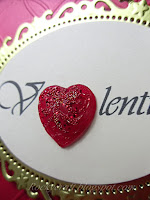 The heart is made using hot glue and a silicone mould. There's a sprinkling of micro beads that went in the mould before the glue and once cold and trimmed it's been coloured with a red peel off pen. I found the peel off pens gave a better coverage than my alcohol markers did.
Using a Spellbinder die I cut a frame in gold mirri card, then using the computer I wrote the word Valentine but missed out the 'a', leaving enough space for the glue heart to fit in.
I didn't have a die the right size to fit in the frame so I drew around the inside of the frame die and cut it by hand. The frame is mounted on foam pads and then put on to card front. 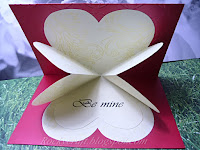 Inside the card is an exploding heart shaped insert. This is cream, as is the oval on the front, stamped with gold swirls. There is a separate heart carrying the sentiment stuck over the swirls, this was also printed on the computer so it matches the one on the front.
When sending this out I may put some tiny red heart confetti in it so it falls out when opened, sent unsigned of course!