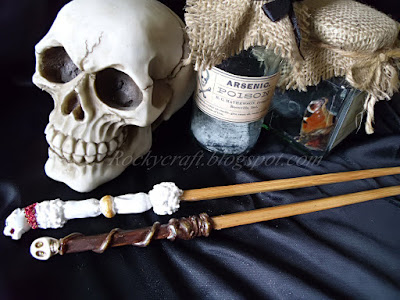 We may not celebrate Halloween very much in this country but I couldn't pass up the chance to play with dark and creepy bits and bobs, it makes a change from butterflies and flowers. 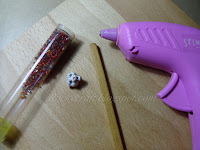 This is an idea I saw on Pinterest and thought it was so quick and easy but so effective, having all the bits in my stash already made it even more appealing.
I could only find two chopsticks in the cupboard otherwise I would have made more. I had a skull bead and a small white tigers head that came off a broken toy, a hot glue gun and some beads. 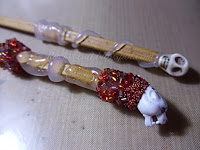 The heads were stuck on first using the hot glue, then for the skull wand I just trailed a string of glue around the chopstick and ended it with a series of loops around the stick.
The tigers head was stuck on first then a band of hot glue that was quickly covered with micro beads in red and gold.I let this start to set then added another band of glue which I rolled in seed beads, once the glue started to set I gently pushed the beads into the glue, be careful when you do this as it's very hot and will burn you.The rest of the stick was covered in hot glue with a band in the centre and another bead band at the bottom of the handle.
I left the wands standing in a jam jar to set hard, the glue goes cloudy again once it's set. Once set firm I painted the wand handles with acrylic paint. The skull wand was painted with brown acrylic, once dry it was coloured with bronze gilding wax on the flat areas and gold wax on the rope like strand. The finishing touch for this wand was to add tiny gems to the eye sockets.
The tiger wand was painted white, I left the micro beads as they were but painted the seed beads. The centre band has gold gilding wax on it but the two smooth areas either side have pearl wax on them. The seed beads have been painted with a thin layer of PVA glue and then dusted with iridescent glitter making this wand a little more feminine. 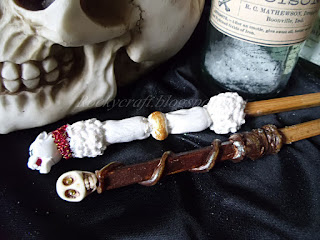 If you wish to make these wands with children they should be supervised at all times as this glue is very hot and can burn, maybe you could add the glue for them and let them decorate the cold wand.
There are so many things you can do with hot glue that my Stix2 Anything glue gun is no longer put away but sits proudly on it's very own chopping board on the edge of my desk just waiting for the next project.


I would like to enter these wands in the following challenges:
Eclectic Ellapu - Halloween / Dark / Horror
That Craft Place - Halloween
Through The Purple Haze - Halloween / Magical
Country View Challenges - Add Texture