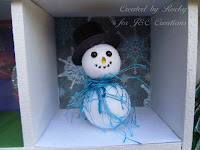 Last week I showed a Christmas Collection Box and promised further details of the snowman and angel, well here they are.
The snowman is two small polystyrene balls stuck together with a cocktail stick spike between body and head. The balls were then covered with PVA glue and sprinkled with white flock.
Once the flock was dry the tiny black gems were stuck on for his eyes and a really tiny nail art gem for his nose. His mouth is a series of small dots made with a permanent marker.
His hat is made using the top from a lip balm stuck on to a small black card disc and coloured with a permanent marker. His scarf is a small length of blue fancy knitting yarn.
He is stuck to a card base that has been covered with flock and clear glitter and he is backed by a small piece of snowflake scrapbook paper. 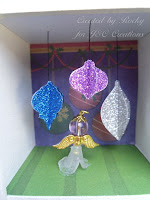 The baubles are cut with the smallest Spellbinder bauble dies, four for each bauble. Each shape has been folded and stuck to the corresponding side of the next shape with black thread running down the middle. To get the baubles to hang properly I made a false ceiling with card and taped each thread securely to it before gluing it in place.
The angel is made using two beads, two finding and a post. The dress is a flower trumpet and the head is a pink bead, the wings are one little finding and the tiny cap at the top is another.
They have all been threaded on to the post, once threaded the end has been turned over to make a loop so it can be hung ( would make good seasonal earrings) or it can be bent over to look like a halo.
This little box has been fun to make, if time allows I would like to make some more for Christmas to have dotted about the house as this one is now travelling the show circuit with J&C Creations.
Posted by Rocky at 08:30