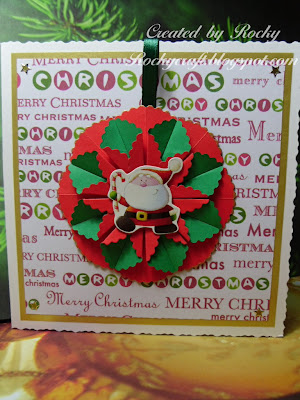 Swinging Santa is this weeks Christmas card inspired by 52 Christmas Card Throwdown's Father Christmas / Santa, CraftyHazelnut's Christmas Challenge Red & Green and Jingle Belles Recycle.
I began by making a red and green bauble using a great technique that will feature here again soon called Dahlia folding and some old Incire paper I had in my stash, red one side and green the other. The outer edge of the bauble has been daubed with gold paint. I had a Santa cut out that I rescued from an old card and kept in the big box of 'useful' bits, so I stuck him on the front.
The back of the bauble has a large white scalloped disc stuck on it so that a personal greeting can be written later and it has a small piece of green ribbon so it can be hung on the tree. It is attached to the card with some low tack tape so the recipient can take it off and hang it up.
The backing paper is layered on to gold and stuck on a deckle edge card with a small star added in each corner. 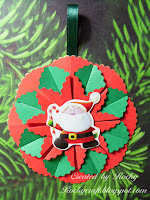