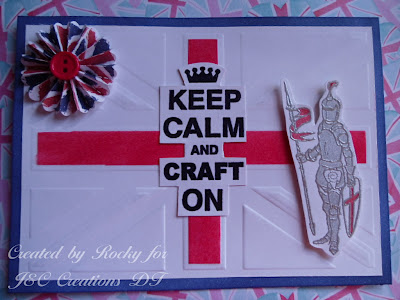 Happy St.Georges Day!
Saint George is the patron saint of England but he was actually a Greek.
St.George became an officer in the Roman army but he was executed on April 23rd 303 for refusing to renounce his Christian faith. He was Canonized in 494 by Pope Gelasius 1.
Saint Georges flag was adopted by England in 1190 for the ships of the Crusades.
The Synod of Oxford in 1222 declared St.Georges Day a feast day in England.
In 1606 St.Georges Cross and St.Andrews Cross were joined together to make the Union Flag.

If you would like to know how this card was made all the details are over on the J&C Creations blog.
While you're there maybe you would like to take a look at our challenge for this month which is 'Nurturing'.

Have a Happy Crafting St.Georges Day.
Posted by Rocky at 07:00