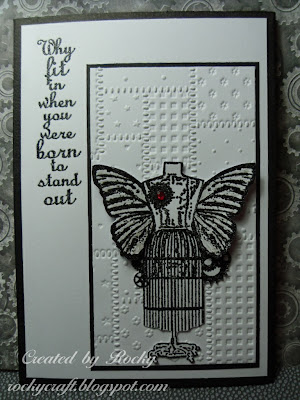 This weeks challenge at Inkspirational is a CASE.  The design team have come up with some great ideas but I was struck by the crisp monochrome effect.
I chose to use a stamp by Creative Expressions called Steampunk Dreams. I have stamped the dummy and embossed with black, it's an old powder that's been in my stash for ages in a little pot my Mum gave me so I don't know who's it is but it has melted a little on the grungy side rather than a smooth finish. That may be due to age or it was meant to be like that but either way the effect with steampunk is rather good, luckily!
I stamped the wings separately again so I could cut them out and mount them at an angle to give dimension. They have also been coloured with a clear Sakura Stardust pen to give them a little sparkle.
I cut out the image and mounted it on white card that has been embossed using a patchwork type folder I borrowed from a friend, I think it's a Universal folder. 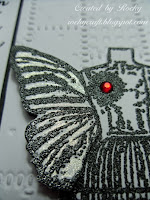 The patterned cardstock is mounted on black and then on to plain white before being stuck on to a white card that has had it's edge coloured black with Distress Ink Black Soot.
The sentiment is also from the same stamp sheet and has been embossed with the same grungy powder. I have added a tiny red gem to the middle of the cog on the dummy's chest just to have a small hint of colour.
It's not come out quite how it was in my head but I'm happy with it non the less. There is no greeting inside yet, I thought I would leave that until I need to use it.