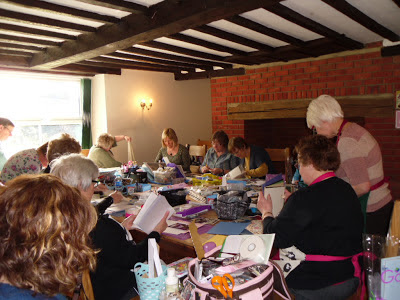 We had two very fruitful and creative days in the depths of Norfolk this weekend.
Fourteen ladies all spent a craft filled weekend in a large farmhouse surrounded by card, cutting dies, gems, flowers, glue, trimmers, cake, coffee and glitter.
They where challenged to produce scrapbook pages that actually featured themselves on at least four of them. This is not as easy as it sounds when you are always the one behind the camera!
The dinning room table had never seen so much activity. 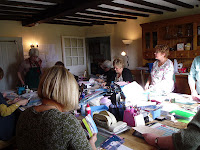 It's a good thing the table was enourmous, it could never be removed without being taken apart and there were plenty of chairs too.  We had another smaller room dedicated to die cutting so that the machines could be left out for easy access. Two large sitting rooms, one for relaxing and another for digi scrapping. A huge conservatory for eating in so that our pages remained crumb free and a local pub with good food so that nobody had to cook either!!!!
The feedback implies that another weekend would be well received. I really enjoyed helping with this retreat, it was so nice to see so much first class work produced by a friendly and creative group of people. Thank you ladies, it was fun and a big thank you to Avril for organising it all and asking me to join her, here's looking forward to the next one!