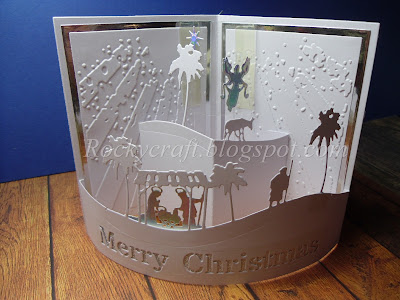 This is not a card, it's a decoration made with card using a card die. I made two cards with this die set and when I picked them up to move them they fitted together rather well, so I played around and worked out it would make a nice circular decoration, this one has three sections but it would work just as well with four. 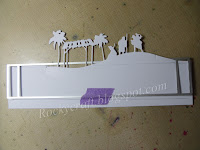 As I wanted three different sections and it's for Christmas what could be better than the nativity as a theme. Raiding my die sets I found I was one short so I have to thank Rene for lending me hers.
Armed with wise men, the stable and some shepherds I worked out who would go where by which way they were facing. I also got a little happy with the scissors and chopped off a few bits here and there so they suited my plan.
The front band on these cards doesn't have a fold line on it, it's what gives it the ability to stand well, this is also where I wanted to add the greetings. To get the right height I cut the scene part first and then cut the band, taking great care not to cut off the scene. This can be achieved by slipping the scene part over the top of the die to avoid the cutting edge, just making sure the 'sandwich' in the machine was not too strong as it may have creased the scene. 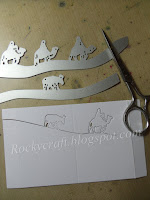 For the folding tabs inside I followed the same procedure with the exception of the donkey and camel, these were on different dies so I had to get creative with my cutting plates. I cut the donkey first, putting the top plate over the donkey but short of the other end of the tab, then I cut the camel by putting the top plate over the camel but short of the donkey. It sounds complicated but it really isn't, a machine will only cut if the sandwich is thick enough so if there's a thick layer missing it won't be able to cut. 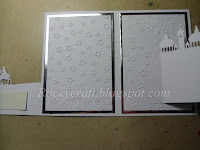 Once all the bands were cut I used the stencil greetings to cut them and added silver glitter card on the inside to sparkle through the words.
I cut three sets of silver mirri mats and three sets of white card for the backings. For the wise men and the shepherds I embossed with stars but for the stable I used a ray of light folder on the white layers.
When I glued the mat layers I left the bottom corners free so I could tuck the band underneath them for a tidier finish. 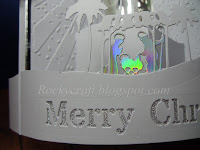 To make the stable scene special I cut the angel, a star and the family in silver holographic card, mounting the angel and star on an acetate tab instead of card.
With all three sections complete I then glued them together to form a circle. In hindsight I should have made sure all the bands where matched in height where they meet, maybe next time.
This would be great displayed on a lazy susan so it could be turned around to view all sections. 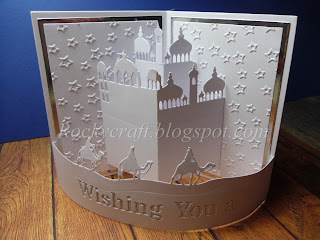 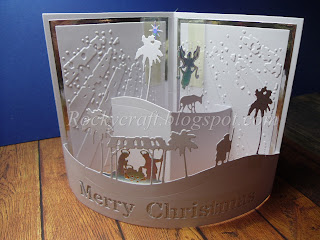 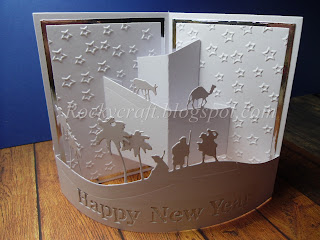 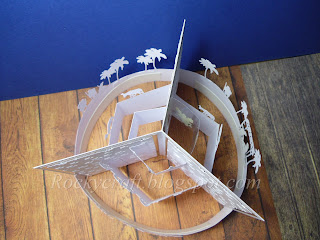