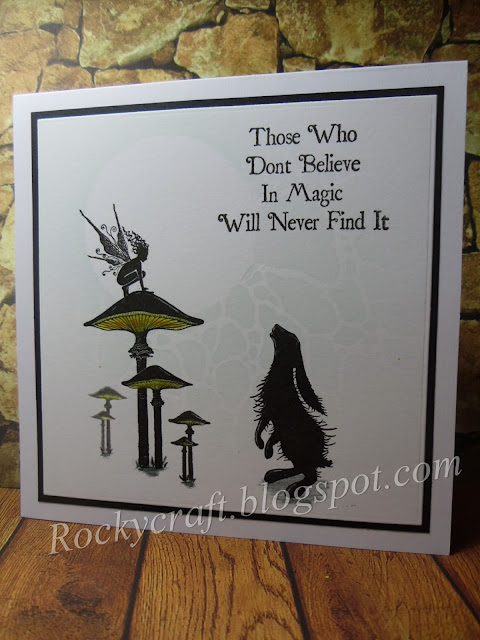 This is a birthday card I made for my friend, she loves hare's and fairies. I was so engrossed in making it I forgot to take any photos of the process, not that you need them as I'm sure you can see just how easy it was.
It started with a square of white card, a large toadstool stamp and Versafine black ink. I have to say having a stamp platform has revolutionised my work, I can stamp a silhouette with confidence now, safe in the knowledge that if I miss a bit I can stamp again in exactly the same place.
I then die cut a circular mask for the moon and placed it partly over the top of the toadstool. With the moon masked I used a stencil, a couple of blending brushes and some Distress Inks to create a subtle background in the centre of the card. This technique was picked up from the amazing Eileen Godwin. 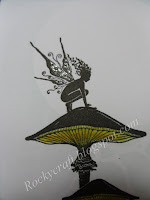 With the mask removed I stamped the fairy, the two small toadstools and the hare with Versafine black ink. Once dry I used a watercolour pencil to add a touch of yellow to the fungi and a little shadow beneath the hare and the toadstools to ground them.
The sentiment was added, again in black, there is no reference to a birthday so she can frame it to add to her growing hare collection.
A little thin black mat layer before going on a white card blank sets off the stamping. The final touch was to add some Stardust Geli glaze to the fairy's wings, just enough to catch the light but not to over power the image.
I didn't know that a moon gazing hare is an ancient symbol of growth, abundance and good fortune, rather nice for a birthday card.
I would like to enter this card in the following challenges:
Animal Friends - Hare / Rabbit
Country View - Silhouettes
Just Us Girls - #574 Animals     Chick of the week
The Fairy and The Unicorn - Anything Fantasy     Top 3
Posted by Rocky at 19:47