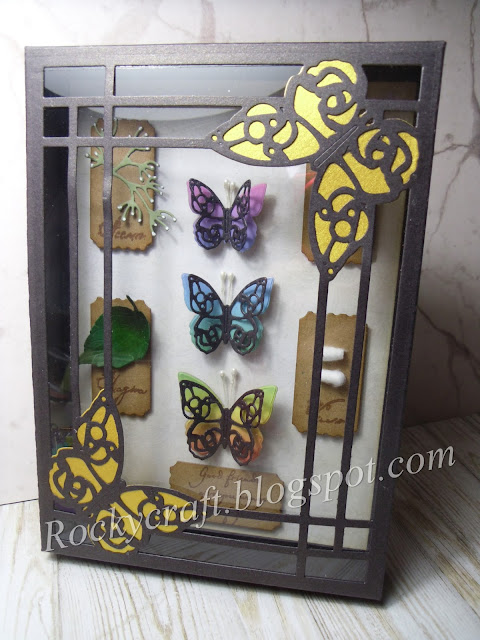 John Next Door has some new dies out this weekend, this project is made with the Deco Butterfly collection. I am fascinated by these insect displays but don't like the idea of harming anything for the sake of art, so why not make it with paper. 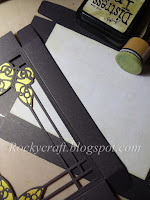 The large rectangular die has no outer cutting edge so it can be used to make a window, as luck would have it I already had a die for a shallow box that was just the right size. It's easy enough to make a box but using a ready made die is so much faster.
The box was cut from dark brown pearl card, there is also a stand on the back cut from the same brown card. Each butterfly has a solid die cut gold shape stuck underneath to accent them.
Adding the acetate to the inside of the lid proved interesting, I had to use very narrow redline tape on the 'bars' of the design to stop them bowing. The inside of the box was too dark without a backing paper, so I used a digi paper and printed it to be very pale, just enough to give a hint of a pattern.
I cut three of the filigree butterflies in brown card and the three corresponding solids from ombre paper. Each butterfly has a stamen folded in half and stuck to the back to create the antenna. These insects were then added to the backing paper on thin foam tape, making sure they would appear in the centre window of the lid. 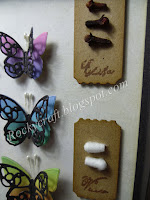 For the added information about the butterflies I used a small ticket die, each one cut in kraft card and edged with brown ink to age it.
The words on the tickets are from a script stamp in my stash, it's an acrylic stamp so I was able to ink just the word I wanted and carefully bend the stamp so only that word was in contact with the card.
The foliage is die cut using some of John's past dies, shaped and coloured before being added to the tickets. The other items are whole cloves, which give the box a great aroma, and two chopped down cotton buds to look like chrysalis. 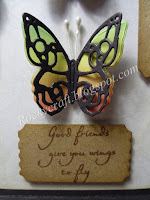 There is a ticket just below the largest butterfly with a greeting stamped on it. This was partly because the wording was right and partly because the script matched the other tickets.
All the tickets were mounted on foam tape to give them a little lift inside the box.
I now plan to trawl through my stash and find any insect stamps and dies I have, then I will make a larger project including a variety of bugs because I enjoyed making this one so much.
These boxes appeal to both sexes, by changing the colours it can be tailored to suit it's recipient, imagine a box full of beetles for a young boy.
Materials used
JND210 - Butterfly collection Dec Frame die
JND211 - Butterfly collection Deco Butterflies dies
JND120 - Foil Rose Leaves dies
JNDAD016 - Elderflower dies
S57320 - Thick Acetate
S57262 - 3D PVA glue
Other items from stash
I would like to enter this project in the following challenges:
The Male Room - #148 Not A Card
Creative Uncles - #14 Wildlife
2 Crafty Critter Crazies - Anything With a Critter
Day Of The Month Card Club - #25 Learn About Butterflies
Crafty Catz - #541 Anything Goes/ Dies or Punch
Mod Squad - Beautiful Butterflies
Posted by Rocky at 12:46