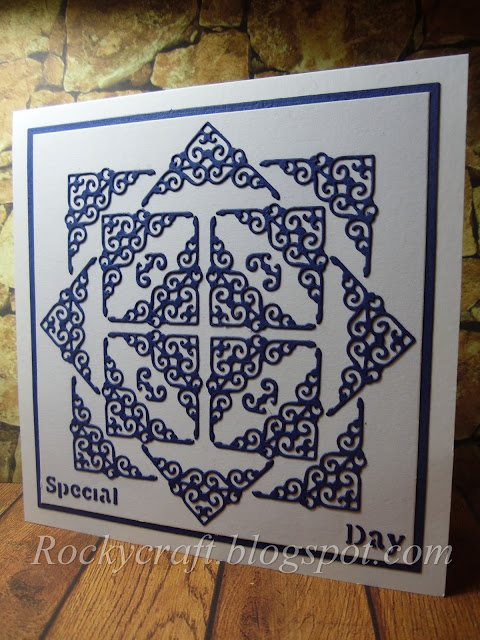 A corner die doesn't just have to be for corners, you can make some great patterns with them., just by careful colour choice you can make them masculine. 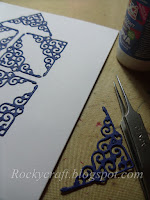 Working on a white square of card and using a pencil I marked faintly the centre lines. The Mayfield corner dies were cut out four times in blue card, this gave me 16 corners to play with, I also kept the waste incase it would be useful.
Starting in the centre I glued down the corners, working towards the outside, checking the measurements along the way to keep it symmetrical.
Once all corners were stuck down I used a few bits of waste to fill in, then gently rubbed out the pencil lines.
The centre pattern panel was them mounted on a blue mat and stuck on to a white card blank. The words were added using the small stencils in the Shutter Card set, sticking the 'waste' from the stencils on to the card instead of cutting them through the white panel. 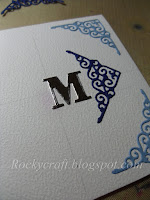 Using a large DL card blank this one was made by sticking the corners directly on to the card.
Again the card was marked out with faint pencil lines, this time I lay the die cuts on the card before gluing until I liked how it looked.
The letters are cut in silver mirri and the corners were cut in two shades of blue. I tried to make sure the spacing was even, it just takes a little time and frequent measuring but I got there in the end.
Two masculine cards using a corner die and a few extras, with no mention of sport, cars or booze! 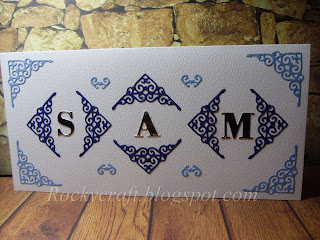 I would like to enter these cards in the following challenges:
Cardz 4 Guyz - #264 CAS
Seize The Birthday - Birthday / option Hearts  (hearts at point of corner)
Simon Says Stamp Wednesday - A Slimline Card
Watercooler Wednesday - #308 Occasions
Posted by Rocky at 16:15