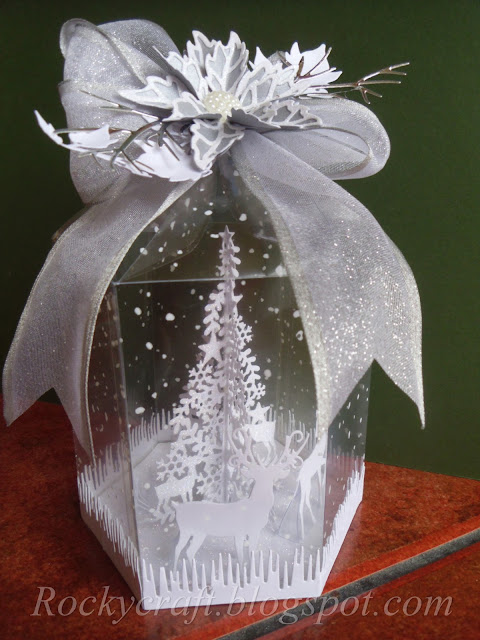 This project was the first one I made with the new Jane's Tree die set from John Next Door, I loved the idea of having a 3D tree. I have used a few of his other die sets to make the complete project, all part numbers are listed below. 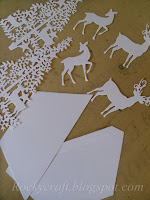 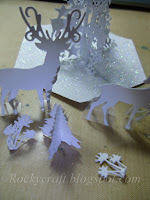 Using a strong white card I cut two of Jane's Tree and two of each of the larger deer from Four Seasons, plus two base pieces from the Large Lantern die set.
I cut down the centre of one tree to the middle and up the other tree to the middle, then I slotted them together. They were then stuck onto the completed base card, glued and covered with clear glitter.
To make the deer stand up I stuck each pair together at the top and inserted an acetate bracket between their feet.
There is also a small pine tree from Finlay's Trees and two sets of flowers from the Four Season's set, all of these have been left as plain card - no glitter. 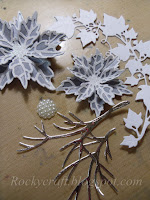 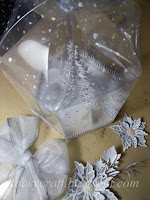 The Large Lantern is cut from snowfall acetate and assembled with redline tape. Once all the plants and animals were stuck to the card base I slid it inside the lantern, stuck it down and tied the top shut with a small length of string.
To decorate the top and hide the string I made a big bow using wire edged silver ribbon and die cut some of Lesley's Twigs, a piece of ivy and a couple of Pinstripe Poinsettia.
These were all stuck on with hot glue, the large flower at the front and the small one at the back. 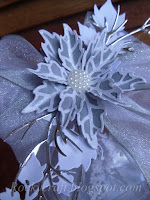 To finish off around the outside I die cut some icicles in plain white card and stuck them upside down, all the way around the base to look like snow covered grass.
I did toy with the idea of adding a small light in the top, but didn't have much time to puzzle over how to fit it or how to switch it on and off, so I'll have to try that on another one sometime.
I think this would make a nice table centre, if you have inquisitive little fingers around it's quite safe as it's all inside the acetate case and if it is dropped it won't shatter.
Jane's Tree die set, plus a few others, will be on Hochanda on Sunday, so keep a look out for the Crystal Forest. 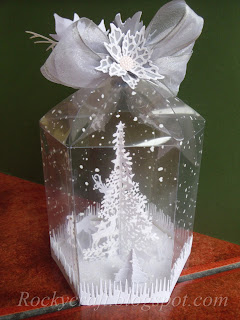