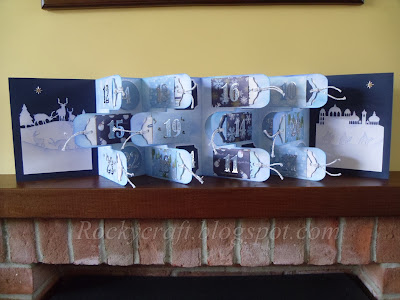 John Next Door has a new design out this week, its' a Tag Card inspired by Barbara Dear. It looks much more complicated to construct than it is, so if you need to send a card with the Wow factor then this design could be it. This card is made using the large Tag Card die set, there is a smaller one aswell.
There is a video on You Tube HERE, by John, showing how to put the basic card together. I did make one small change to my card though. When the tag insert is folded the single tag sticks out further than the two tags, I didn't like this so I moved my score line over by 5mm to get the tags to sit evenly. I would suggest cutting two inserts in rough card and playing around until you are happy with how it all works, this will save any hiccups with your good card. 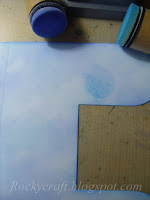 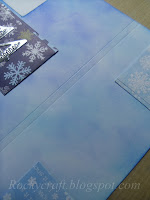 For this card I cut the two covers in dark blue card and then cut five inserts in white card. I coloured the inserts with two blue Distress Inks, there were some patches that weren't perfect but much of the card was covered by flaps and tag pouches so it didn't really matter.
I decorated all the inserts before folding them so there would be no obvious crease lines showing on the finished card, plus it's much easier to stick things down on a perfectly flat surface. 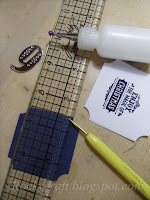 There are three tags per page so I die cut 12 little envelopes using a Sheena Douglass die called Sown With Love, it's the perfect size to hold the tag that comes in this JND set. All the envelopes were cut from a paper pad that's been in my stash for years.
There are also 12 flaps in this card, these were cut from two shades of blue card. I used the shapes in JND Pop Box set for this because each shape has at least two sizes, but any shapes you have will do just as well.
Each flap is slightly smaller than the decorated white shape it covers. All the white shapes have different pictures or sentiments stamped on them, this is a chocolate free calendar but you could write special message under each flap and turn it into an advent chocolate hunt if you wish. 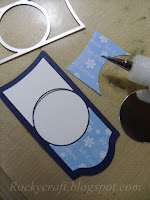 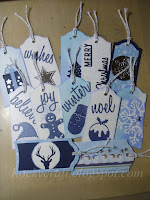 Each tag is different, again you could write special messages on these, to be kept in the card or used on gifts.
In this die set you get a fancy tag as well as a basic shape so there are many possibilities, especially if you raid your stash and use dies and stamps from other sets. 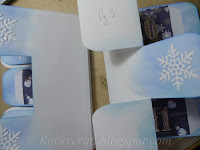 I have decorated the backs of each tag that sticks out with the same inks, each one has a die cut snowflake stuck on it just to add to the overall look.
With all pages decorated I stuck them all together, I would strongly suggest laying them up and checking all is right before you start to glue them together, check twice and glue once! 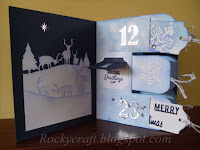 When it came to the covers I tried them on the card and noticed that the spine stuck out a little, so I trimmed approximately 2mm off the inside of each cover. This allowed the pages to sit neatly within the covers like a real book.
Again each cover was decorated before it was stuck to the pages, I kept the front simple as the inside is what will be on view most of the time. 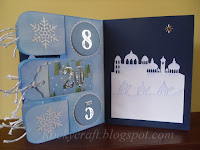 All of the numbers used are from the Advent Numbers set used with the Pop Box die set released last year. All cut in silver mirri card and stuck on at random so the recipient has to search for the right one each day.
This card did take a long time to make but I hope you will agree it was worth it, after all it will be on show for almost a month. 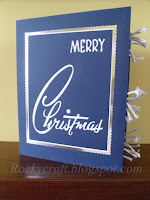