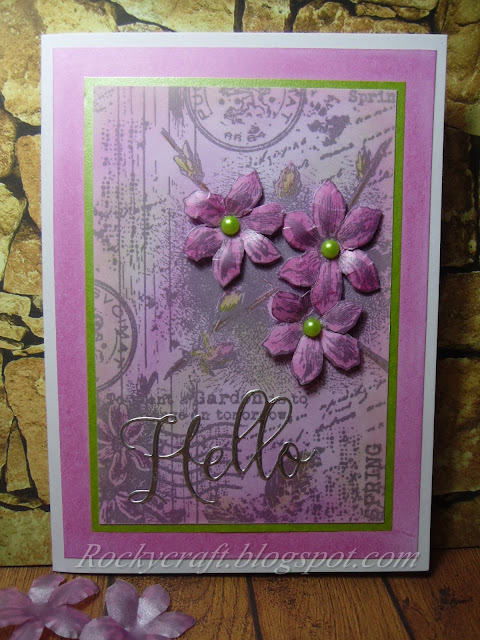 This is a sample for tonight's show on Hochanda featuring Mica Magic from Craft Artist. John Lockwood will be demonstrating how versatile this colouring medium is for all manner of substrates, not just card. 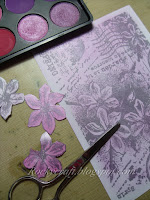 For this card I have teamed the new Mica Magic with a new stamp by Two Jays called Spring, as you would imagine there are three more stamps in the set but they can be bought individually.
I stamped the image twice in grey on white card, I thought black looked a little harsh. Using the Autumn mica set I coloured one image with pinks, I wanted a little green so I used Distress Ink Peeled Paint.
I cut out the flowers from the second image and coloured them with pink mica, making sure they were a little darker than those on the image panel. 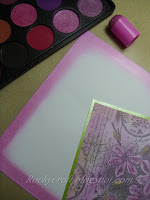 After colouring the flowers I shaped them with a ball tool and added a small pearl that was coloured with an alcohol marker.
I found a nice green piece of pearl paper in my stash that went well with the green ink, so that was my first mat layer.
For the second mat layer I wanted pink but non of the papers I have were a good match, why not use the mica?  I cut a thin white card mat and then edged it with the same pink mica as the image panel, as it was only around the edge it didn't use too much mica and it gave a perfect match.
Once all the layers were stuck together I added it to a white card blank and glued the cutout flowers in place, it's much easier to mat and layer before adding embellishments.
All that was left was to add a die cut greeting, I chose silver so it wasn't too bold and kept it flush to the card.
These mica's are a creamy based medium so they behave a little like a gilding wax, because of that cream base they don't need a fixative like mica powders do.