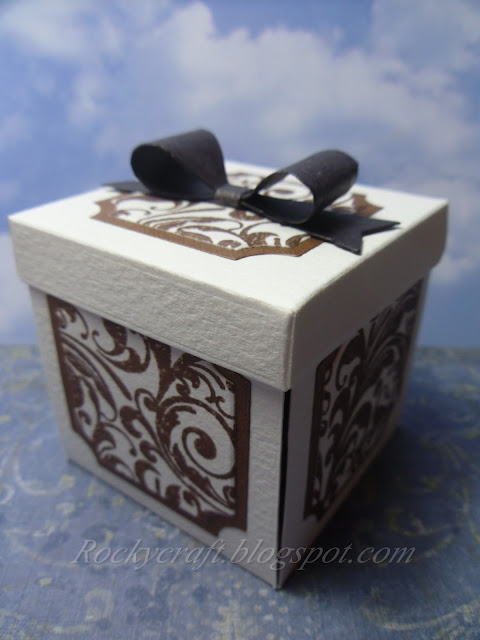 Another pop box made with John Next Door's new die, this time a 'Thank You' gift. It started as an idea to hold a cup cake but quickly took shape as a chocolate box. 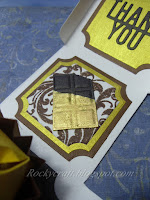 The box base is cut in watercolour card, it's a nice thick card with a dappled texture and being off white looked better with the brown embellishments.
Using the notched square I cut a mid brown shape for all four sides and lid, both inside and out. I kept the gold for inside the box so that there would be more of a wow factor upon opening.
The swirl pattern is stamped on watercolour card in Memento Rich Cocoa, which went quite well with the brown card. The Thank You inside the lid was cut in dark brown card as was the bow on top of the box. 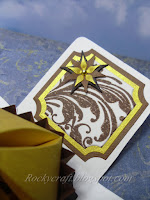 To decorate the panels inside I used the 'window' die to emboss a piece of dark card and trimmed it to make a chocolate bar, then wrapped it with a little gold foil and chomped a small corner like teeth marks.
Using the Star Flower I cut several shapes in both shades of brown and gold, layered them up and added a small gold pearl in the centres. They are stuck on the inside panels at random and are different sizes so it doesn't look too uniform. 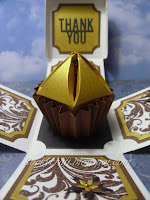 The 'chocolate' in the middle is made from gold paper die cut with John's Small Lantern, with a bit of snipping and chopping it came out as an imitation Ferrero Rocher. The little case it sits in is a die cut rosette frill and it's all stuck down on a dark brown notched square.
I did want the chocolate to open but it became far too complicated so I opted for a sealed one, it would make a great card to go along with a box of chocolates though. 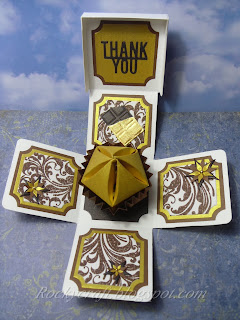