Patterned Paper In The House Of Cards 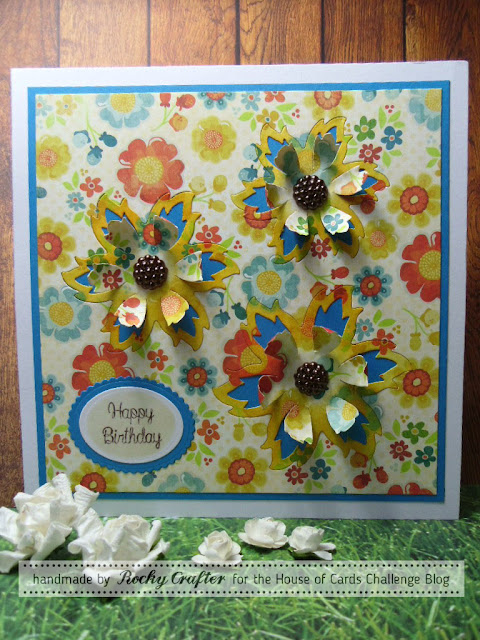 The new challenge at the House Of Cards is to use patterned paper and/or the colours on the swatch. I found this paper in my stash and thought it would ft the bill nicely. 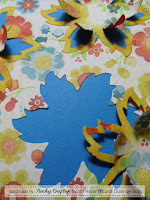 I die cut some flowers from the double sided patterned paper, oddly thinking they would only cut the folded petals and not the complete flower....wrong, definitely having a silly moment with that one.
This actually turned out to be a good thing, it meant I could colour the outer petals before returning them to the paper, that way they would stand out a little.
The patterned paper layer was stuck over a blue mount layer after I cut out the flowers, then each coloured flower was stuck back in its place but only around the edges, the inner petals were all curled upward. 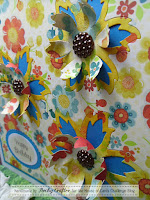 Once dry each flower had a nobly gem stuck in the middle to add texture and interest. This paper panel was then stuck on to a white card blank.
The sentiment was stamped on white card and die cut, then coloured cream to match the background on the paper whilst still in the die, this gives a little white border. A scalloped oval in the same blue card was what was needed to go under this sentiment, it's stuck flush to the card so it could be posted if necessary but may be better hand delivered.
The House Of Cards challenge runs all month so pop over and join us with your cards, we'd love to see them.