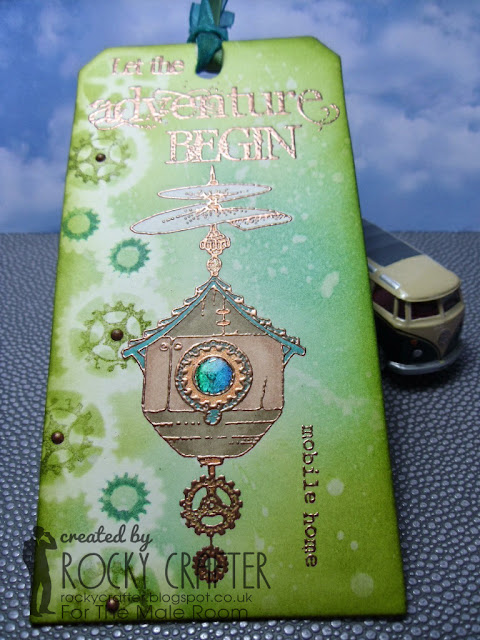 Welcome to the Steampunk challenge at The Male Room, this challenge will run for two weeks for anything masculine and steampunk themed. 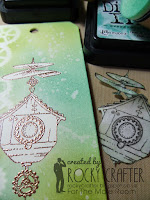 Steampunk doesn't have to be dark and grungy if you don't want it to be. It's a science fiction/fantasy style with an historical setting, typically featuring steam powered machinery. I have a great set of stamps from Chocolate Baroque, called Steampunk Travel, which features several versions of everyday items with a steampunk twist.
To start with I stamped the 'mobile home' and embossed in copper, then stamped a mask using Stix2 masking sheet and cut it out. With the image covered I used Distress Inks to colour a tag cut from mount board, making use of a cog mask at the same time. A spritz and flick with water to lift some colour and a run around the edge with the darker green finished off the Distress colouring.
The image has been coloured with alcohol markers, because the tag is mount board the marker has not gone through to the back, which is a bonus. A little use of a copper gel pen on the cogs and a white Sharpie on the sail was followed with some Stix2 foils in the little window, then it was covered with Glossy Accents.
The masked cogs were overstamped with the same Distress Ink colours and a small dot of bronze PVA was added to the middle of the large cogs.
The addition of the sentiment, also embossed in copper, only left the need for ribbons in shades of green to complete the tag. It will be delivered to a friend who is building his own camper conversion since his caravan became very poorly.
You have two weeks to join us at The Male Room with your steampunk creations, we have some inspiration on the blog to help get you started so please pop in and say hello. 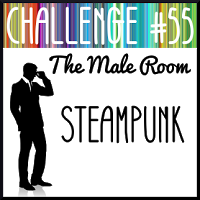 I would like to enter this tag in the following challenges:
Come And Get It - Creations For Males
My Time To Craft - Travel
Cardz 4 Guyz - Tag It   (Top 3)
Chocolate Baroque - Colour Challenge