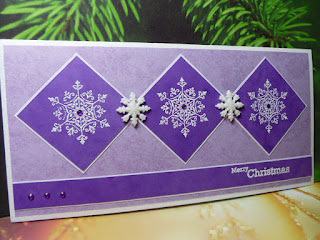 This weeks Christmas challenges gave me something to think about. I wanted to try and tie all of them together in one card if I could so I really had to put my thinking cap on.
52 Christmas Card Challenge is a sketch so that was my starting point, then Craftyhazelnut's Christmas Challenge is anything beginning with 'P' so I chose purple. The subject came from Jingle Belles who are asking for anything to do with H2O (water) so that meant snowflakes would be good. Winter Wonderland are asking for monochromatic so using only purple and white would do that one and Sparkles are looking for anything Christmas. 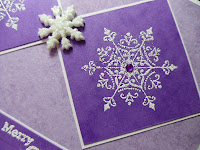 I have used a snowflake stamp that was free on a magazine and embossed it with a mixture I made myself, it was pure white but I wanted some sparkle so I have put one child's medicine spoon of white in a tiny jam jar and added a generous half spoon of a clear sparkle powder to get the mix I wanted. I've never done this before but I have heard of other people doing it so I thought I'd try and I'm pleased to say it worked. The centre of each snowflake has a purple gem on it and I've also added three gems to the greeting bar. The two snowflakes are embellishments from my stash and I wish I could remember where I got them because they're so pretty, they do sparkle, it's just my photography that lets them down.