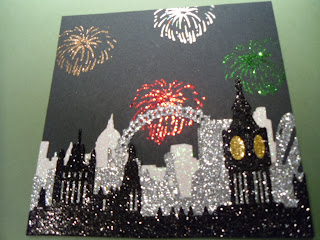 A Sparkling New Year to you all. This my first challenge entry of 2013 so I'm starting it off with a bang!
Over on Jingle Belles Rock the current theme is 'Look What Santa Brought Me' so I have set too with the FlitterGlu kit I got from my son and a new set of die's from Do Crafts that Santa would have got for me if they had been released before Christmas, honest!!
I have used the die's to cut my London skyline in black, silver and white glitter card. Having seen the fireworks at New Year I thought the clock face should be gold. I chose to have white at the back as I wanted to mount it on black card, then I could use my FlitterGlu with flakes and glitters to make the fireworks.
I have a firework stamp in my stash that has been around for ages, it originally came from Anita's. I followed the instructions in my kit to apply the FlitterGlu and was quite impressed with the result. I experimented with glitter, guilding flakes and foils to see what they looked like and though the foil was good it didn't have the right look for this card, so I stuck with flakes for the silvery explosion and fine glitter for the red, green and gold.
I think I shall be using this product quite a bit more. It makes using the stamps you already have more versatile as they're not just for ink anymore. For those of you not familiar with FlitterGlu it is available from IndigoBlu.