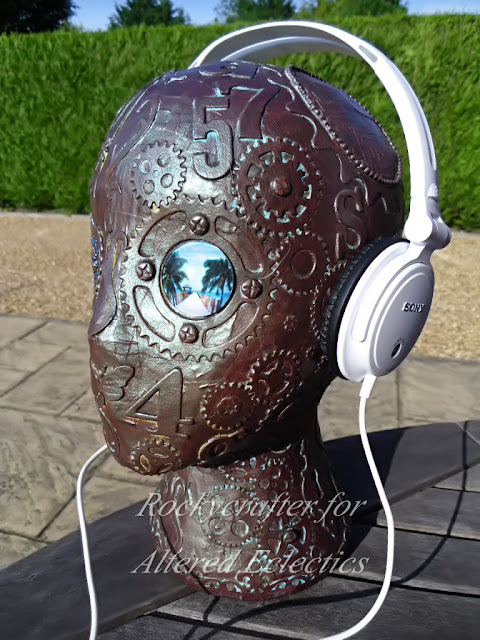 Welcome to this months project for Altered Eclectics. This one took a couple of months to make, it's an idea that's been buzzing around in my head ever since I saw a polystyrene head in the charity shop. 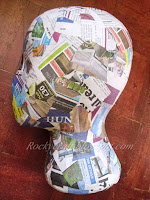 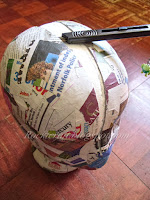 I decided that I might want to make another bust sometime, so I covered the head with cling film before starting to cover with papier mache.
I used approximately 250ml of an inexpensive children's PVA glue and a complete copy of my local weekly newspaper. 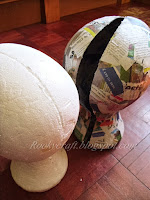 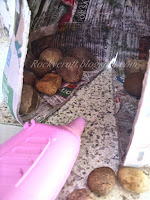 The paper cast is about seven layers thick, nice and firm. I tore my paper into pieces, this seems to make the finished cast a little smoother.
I had to cut from top to bottom to remove the polystyrene form. While the head was undergoing surgery I glued some stones inside to weight the bottom, this will stop it falling over when the headphones are on it. 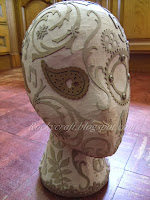 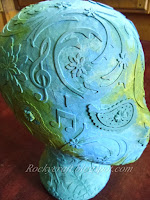 Once 'stoned' it was another operation to heal the cut, a little masking tape to hold it shut followed by two layers of papier mache.
When completely dry it was painted with white gesso. Then came the fun part, adding all the cut outs.
The left side is covered with cogs, numbers and letters and the right is covered with flowers, music and patterns.
After the gesso I painted with a mix of Distress paints in Evergreen Bough, Peeled paint, Salty Ocean and Broken China. 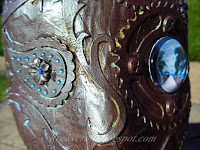 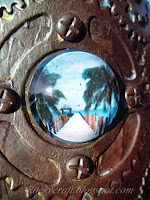 After all the paint had dried, which seemed likes ages, I could begin to 'grunge' it.
I have used Cosmic Shimmer gilding wax Autumn Bronze to make the head look like an old bronze bust. 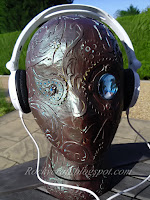 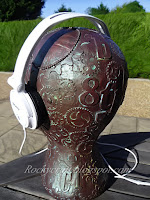 As the wax doesn't completely cover the paint it looks aged and with a good polish with an old duster it shines beautifully.
Some finishing touches were some tiny gems on the flowers and along the paisley shapes. The left eye is a glass dome stuck over a desert island photograph and stuck on with silicone glue.
It has been given the teenage boy seal of approval so now sits on the window sill sporting a pair of headphones, it was intended to stop them being left on the sofa and sat on, so a creative and useful result.
Please pop over to Altered Eclectics to see what the DT have come up with, we would love it if you came and joined us with your creations, anything mixed media but no cards or ATC's.

I would like to enter my creation in the following challenges:
SanDee and Amelie's Steampunk  - Anything Steampunk
We Love To Create - Anything Mixed Media
Classic DT Challenge - Anything DT
More Mixed Media - Anything Goes (optional Purple)
That's Crafty - Masculine
Country View - Circles