Cooking Up A Spell 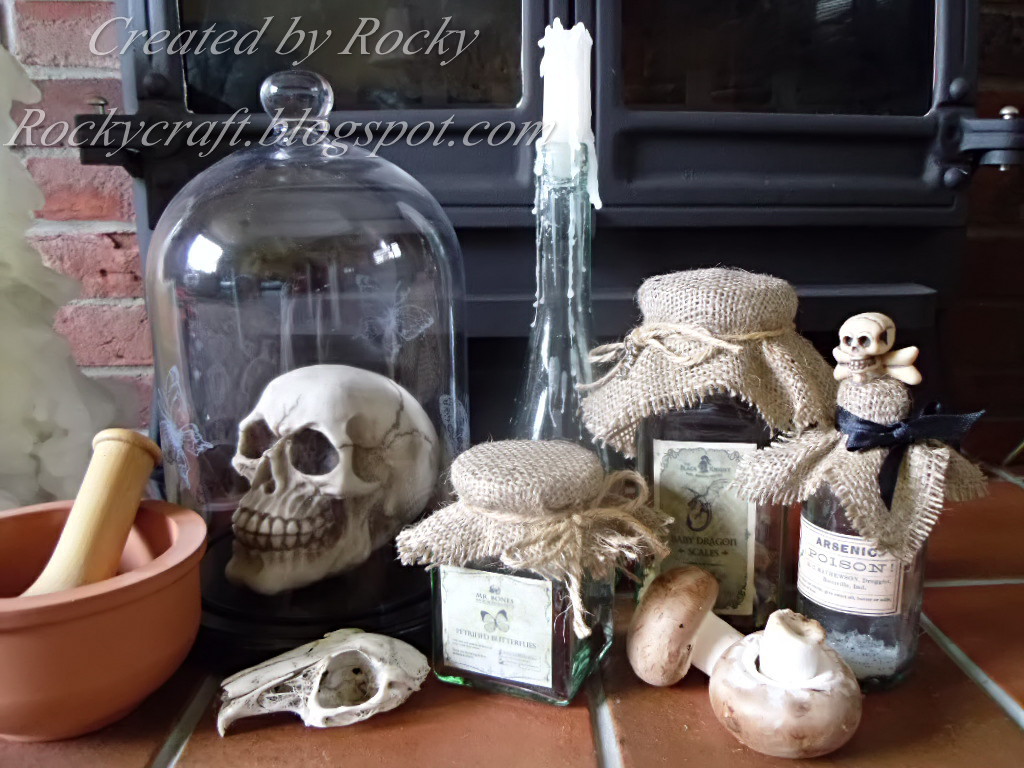 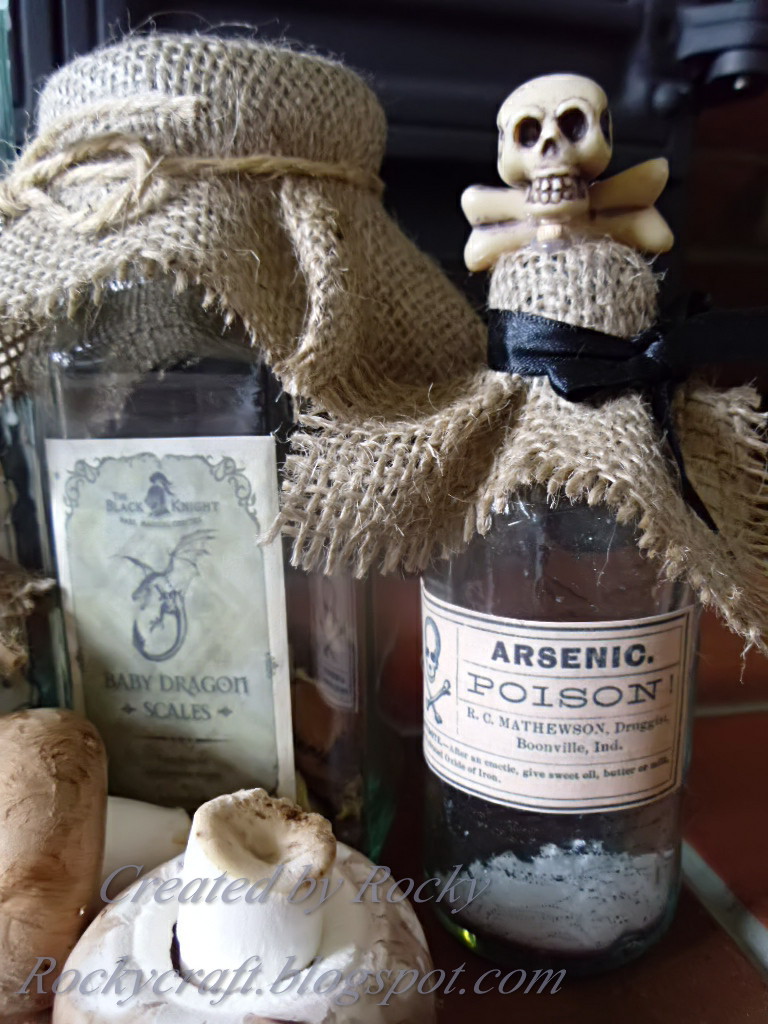 Although we don't celebrate Halloween much in this country it does give us crafters the chance to make something different. Lots of distressing, black, orange and purple as well as some rather macabre embellishments. I really enjoyed making these jars, it was a challenge to find the contents to match the labels.
The skull is made of resin, a charity shop find, and sits in a lovely glass dome from Sainsburys. With the addition of my pestle and mortar, a couple of mushroom from the fridge and a rabbit skull my son found the scene is complete.
The Arsenic bottle is filled with Ice Diamond Flowersoft, there's not much left so look out! The skull and cross bones came from a necklace I found last year in a sale, he's stuck on to a hessian square that is wrapped around the top and tied off with black ribbon.  The large jar is labelled Baby Dragon Scales, I tried a few things but the best one was beech nut cases. They are velvet smooth on the inside and prickly on the outside but they don't take paint well, brush or spray, so they've been left natural. 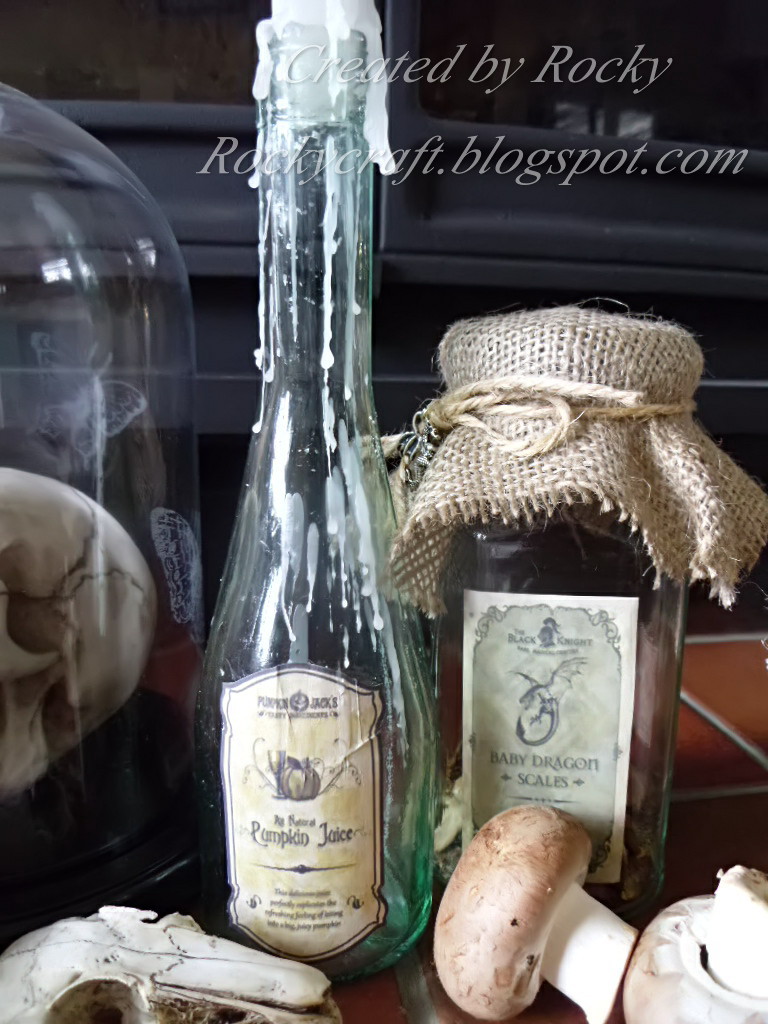 For the Pumpkin Juice bottle I stuck the label on and then put a candle in the top and set it to burn right down. I put this on my cooker hob so it was safe and somewhere that's used to dealing with heat. It was torment waiting for it to dribble down the bottle, not something you can speed up with a heat gun.
The bottles came from a lucky boot sale find but the jars were food stuffs I had to eat to get the jar. The bottles have a greenish tint to them so I wanted jars that were a bit that way too, I think they look older.
The labels were free digis from Primcats blog, lots to choose from and of course being digis you can print them whatever size you need. 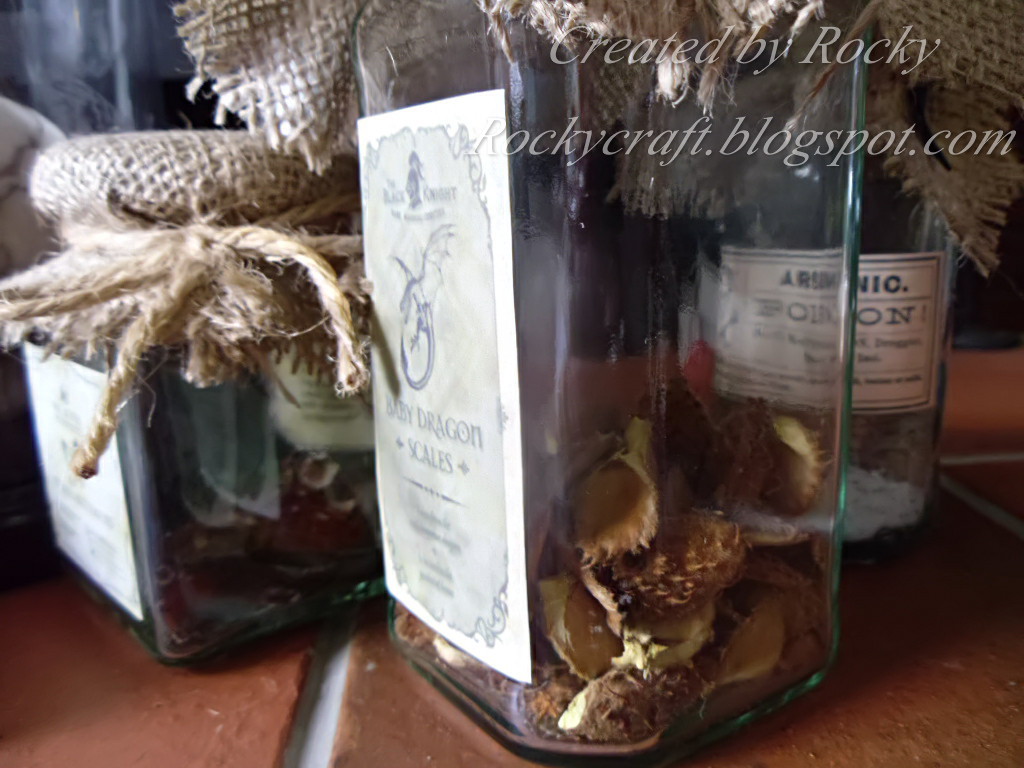 The small square jar is labelled Petrified Butterflies, this was easy to fill as sadly quite a few have died on the windowsill in the shed and the garage over the years. They're so pretty I have kept them, maybe one day I'll set some in resin.
I'm still working on a few other jars and bottles, I had a great shopping trip this week collecting glow-in-the-dark items so I'll pop back and show you what we've made nearer to Halloween.

I would like to enter my jars in the following challenges:
Bloggers Challenge - Halloween
Simply Create Too - Halloween or lots of Orange
Altered Eclectics - Anything Goes
Recycle, Re-Purpose and Re-Invent - Halloween
Rhedd's Creative Spirit - Halloween
Left Of Centre - Halloween