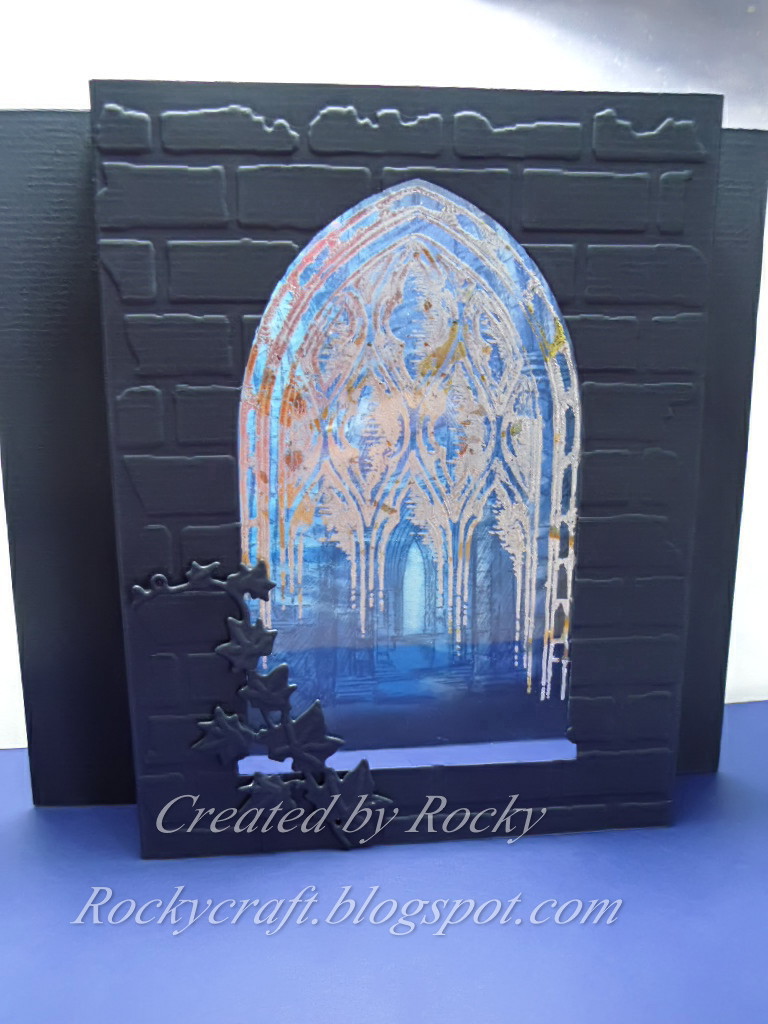 There are several challenges this month that wish to see your New stash and a few that would like to see something that was new a while ago but has never yet been used so this set me thinking.
I treated myself to a set of stamps from Chocolate Baroque that I've had my eye on for some time, Gothic Fragments. These stamps seemed to fit well with a Sheena Douglass stamp I've had for a while but not used before called Ancient Arches. I also found a set of Spellbinders in a sale that were also arches...meant to be wasn't it.
Sheena has a rather good video tutorial on You Tube to create a scene with her arches stamp so I gave it a go, not too good so I did it again, still not so good, but third time lucky. I did things a little differently the third time and for me that seemed to work. I chose to stamp first and then add colour, this helped me get it in the right places and by this time the brush technique was well practiced too! 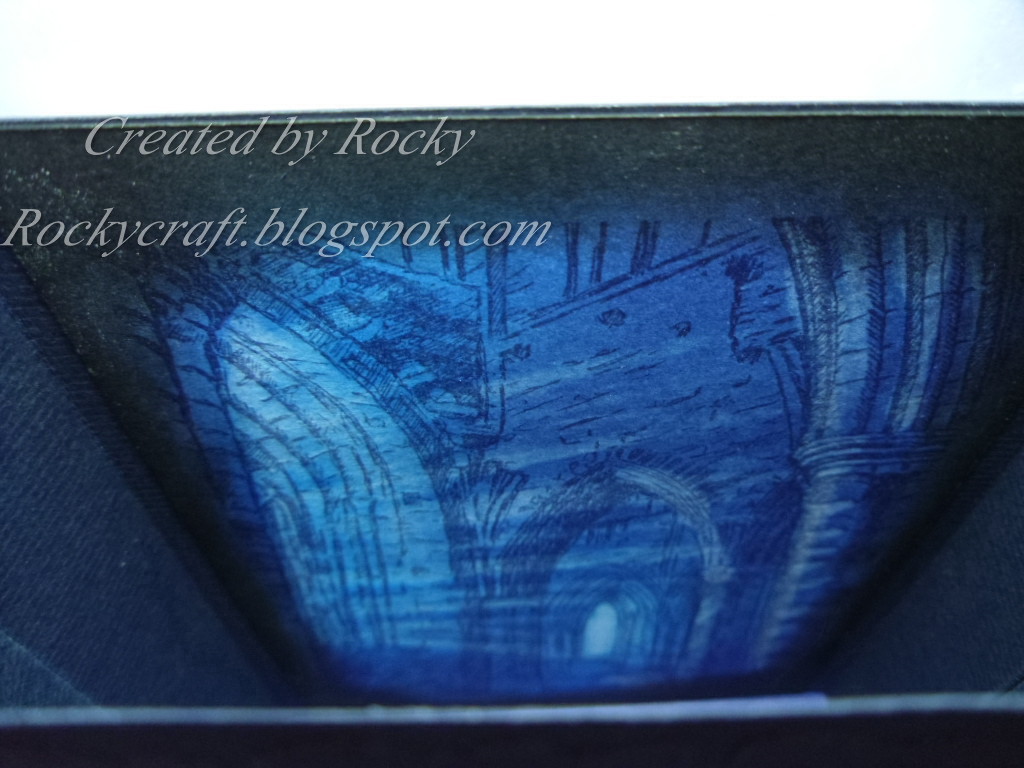 This is a rather dark card but I really wanted to use blues, this lent more to a night time scene. My friends daughter is a bit of a Goth so this will suit her well.
I cut the arch from the front panel before embossing, I had to use the Grand Calibur for this as I couldn't get it through my Sizzix with out folding it over which would have messed it up. The card is a very dark blue which embossed really well with a brick folder form Creative Expressions. 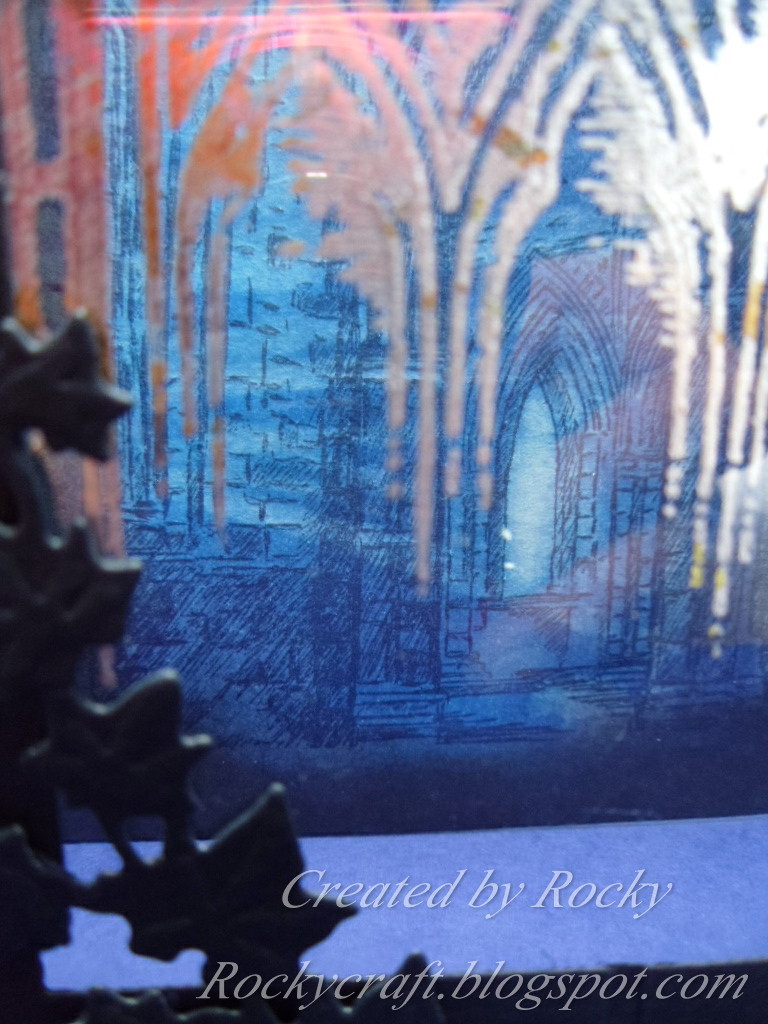 The acetate in the window is some of the packaging from the Spellbinder die set, crafters waste nothing...it may be useful!
I have used the Choc B stamp with Flitter Glu and gilding flakes on the acetate which gives a great effect. This stamp fits the second size arch die perfectly which made life much easier when mounting it up.
With the addition of a little ivy cut with a Marianne die on tiny foam pads to the front my box card was done. I did try adding a little white to the card front but it didn't look right so I chose to stay all dark and mysterious.
I'm hoping that this will also fit into a monochrome challenge, it is all blues including the stamping but the gilding flakes are silver with a few bits of gold so we'll have to try it and see.
With the addition of a Christmas Sentiment this will be perfect for Bex, she doesn't do cute! 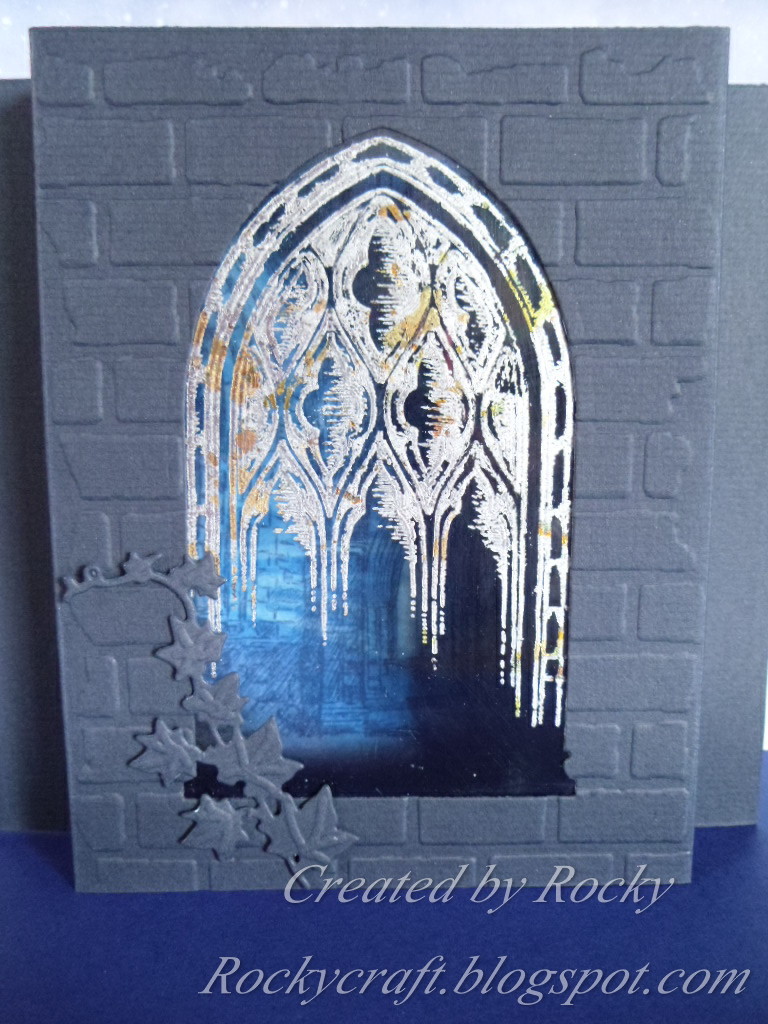 It depends on the angle you view the card as to what you see most. With top light you can see the inside clearly but with front light the silver window really stands out. A card that changes with the light, much like a real ruin.


I would like to enter this card in the following challenges: