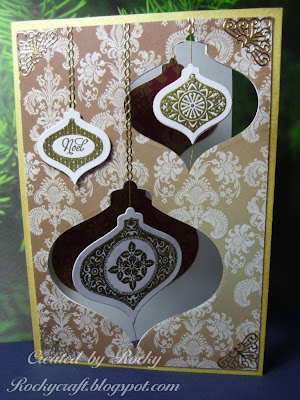 Have you ever started something you thought was a good idea and then wondered whether it would actually work? Well this is one of those ideas. I'm pleased to say I finished it, thanks to the encouragement of my crafty friends last night, but it doesn't look as it did in my head.
52 Christmas Card Throwdown's challenge this week is ornaments and CraftyHazelnut's challenge is frames, windows or apertures so it was then a challenge to put them together.
I began by die cutting my card front, another piece of white card and both patterned papers all at the same time. This meant that all apertures where in the same place exactly saving me lots of measuring and fiddling about later. I have used Spellbinders Heirloom Ornaments 2011 which matches up perfectly with Just Rite cling stamps Merry and Bright / Deck The Halls.
I also cut out several bauble shapes to hang and stamped and embossed them in Bright Gold from Cosmic Shimmer. 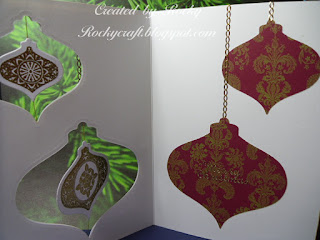 Each hanging bauble was cut and stamped twice so that I could put one either side of the gold thread that is stuck from top to bottom of each opening. This way the card looks good inside and out.
The red baubles are stuck on the inside of the card so that when the card is shut they fill the apertures. This was done by sticking them in place through the apertures with the card shut, just be careful not to use too much glue or you could stick your card shut!
The largest red bauble has a 'Merry Christmas' peel off on it and each bauble is hanging on a peel off chain. 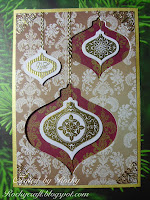 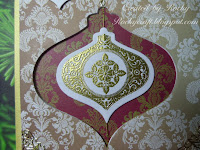 There are also gold corner peel offs on the front of the card, I have tried stamping before and usually get three good ones and the last one goes wrong!
The pattern in the papers lines up perfectly despite the colour change because they where cut together. I also chose to use the second card piece on the outside as another layer so that inside stays clean and simple. The threads are sandwiched between the card front and the mat layer so all mechanics are hidden.