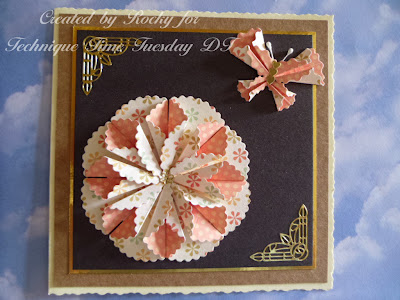 This months challenge at Technique Time Tuesday is Dahlia folding.
We've had fun making our DT samples so please pop over, have a look at the amazing video tutorial and join in the challenge.
It's like T-Bag folding but with a circle instead of a square, Tetley not Typhoo!  I must admit choosing a scalloped circle gave me an easier fold as I could match up the edge with no fuss. Each flower takes eight circles which you fold individually, it's not as fiddly as you might expect. There is a really clear tutorial on the challenge blog. 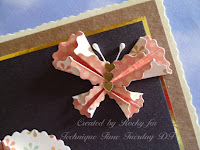 You don't have to make a full flower, some of my fellow DT members have come up with variations which you will see over at Technique Time Tuesday. The butterfly on this card is made with two medium circles and two small ones, some flower stamens for his antenna and three little hearts for his body.
It's not limited to flowers, you may have seen in a previous post I made a Christmas bauble with this technique. Definitely one to try now and then again for Christmas.
The challenge runs for the month so there's plenty of time to have a practise before you play and we've got hints and tips coming up next week too. I hope to see you there, Happy Crafting!