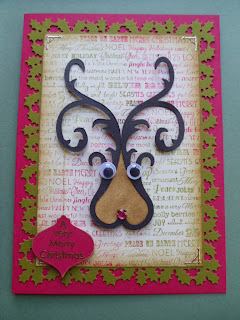 I'd like to introduce Timothy, one of the less well known reindeer.  Tim has been made using a Sizzix Bigz die called Elegant Flourishes.  I cut two of the small flourishes from pearl chocolate card and turned one of them over to mirror the other, then pushed them together to make Tim's head. He has two small wobbly eyes, a little red gem glued on for his nose and a small piece of brown card cut to fit behind his face.
Tim is mounted on foam pads and stuck on to a background stamped with a very useful stamp from Penny Black called Christmas Story - available as a Slapstick cling stamp. The stamp was inked up with Distress Inks in Fired Brick and Forest Moss on to cream card.
The green holly leaf border is punched using a Martha Stewart punch around the page set. You start off with a piece of card measuring 5 x 6.75 inches and end up with a centre just under 6 x 4.
Then the last layer is a cherry red card blank. I have used a small piece of the same card to cut out a bauble with a Spellbinder die - 2011 Heirloom Ornaments which is then hung from Tim's antler with thin gold thread. The greeting is from a set of Penny Black stamps called Christmas Critters and embossed in gold. I have added tiny gold corners to the background just to give a little shine.
Whenever you buy a new die have a play with the pieces, it's amazing what else you can make with them.
Posted by Rocky at 22:22