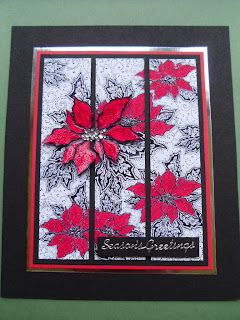 This amazing stamp is from Stampendous, I fell in love with it the moment I saw it on a day out at Stamperama in Stevenage last sunday.
The image has been stamped on white card and embossed in black. The flowers are coloured with a red watercolour marker and a little sparkle has been added to the centres with some Cosmic Twinkle silver glitter glue. The largest flower has been stamped again on a small piece of card and coloured the same red before cutting out all the petals. I used a black Promarker to touch around the edges so there were no white bits showing.
The centre of the large flower is covered with white gems to give extra sparkle. I used some Glossy Accents on the petals but when it dried it left wrinkles, didn't put enough on maybe, but I rather like them as they look like veins so that was a happy accident.
The whole image is cut into three strips and mounted on black card, which is then mounted on red followed by silver mirri card and finally black again. 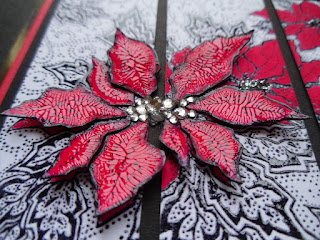 In this picture I hope you will see the veins on the flower and the shine of the black embossing.
I think there will be much more done with this stamp,  it lends itself to many more ideas including the ones shown in the last picture. These are pictures made by my son and his friend who were watching me while I made the challenge card. They used a stamped image which they coloured in and mounted on some fabric bits I had hanging around, then they mounted that on cardboard and made a stand on the back so it would stand up by itself. I was so impressed by them that I promised to blog their efforts for them, well done boys! 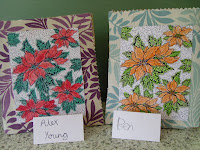 I would like to enter my card for the following challenges: