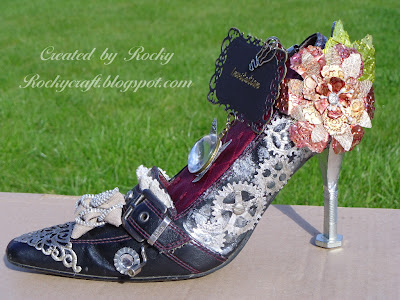 At last here is the steampunk shoe I promised before Easter. It has taken a little longer than anticipated but it's finally finished.
It began last year as an idea to accompany The Boot but it took ages to find the right shoe. It couldn't be any old shoe, it had to have the right look to begin with and I finally found it a couple of months ago in a charity shop. There was only one shoe so I got it for a small donation rather than throw it in the recycle bin. 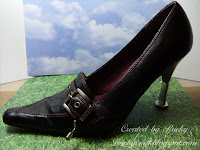 The first thing to do was chop off some of the heel and replace it with a bolt. It already had a strap and buckle which was perfect.  I had a small musical movement in my stash so I punched a hole just below the buckle for the handle to poke through and stuck the movement in the toe  of the shoe. I had to add some packing to stop it from sliding forward and to make sure the handle cleared the buckle when it was turned.
I covered the heel with aluminium tape to help keep the bolt on and hide the join. 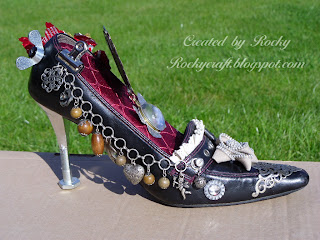 I have collected all sorts of bits from charity shops and junk shops over the last year just for this project. Not everything was suitable in the end but I have used a wing nut on the back held in place by wire threaded through a button and tied off inside the shoe.  The chain of charms is part of an old necklace secured at the top by a small bull clip and at the bottom by a screw top brad through one of the holes in the strap. Also on this side is a large gem stuck in the middle of a ridged washer. 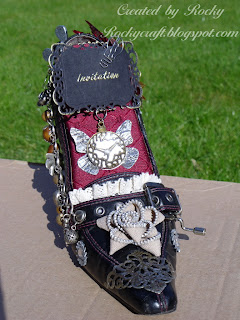 The metal toe piece is a decorative corner from Creative Expressions bent to fit. The crochet lace has been added to the back of the strap using double sided tape and the zipper rose was made from a new zip I chopped up. I found a really good tutorial on line showing how to make zip flowers, this one is no where near as good as the tutors!!
The inside of the shoe had to be hidden after all the things that have been attached to it so I have chopped up some polystyrene and covered it with a dark red fabric that matches the stitching all around the shoe. This is not stuck in so if anything comes undone or the music stops working it can be sorted without destroying the shoe.
The clock is made from a charm stuck on to card and covered with a Glass Glintz dome, stuck on with Glossy Accents. The wings are from a butterfly stamp cut out and stuck on the back. It is attached to the memo pin with a jump ring. 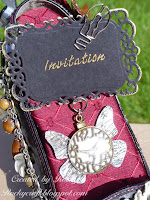 The invitation is cut from black card using a Spellbinder die Decorative Labels Eight. I've run around the edge with a gold acrylic paint to jazz it up a little and spelt invitation in peel off letters.
The light bulb paperclip is from a stationary shop but I can't remember which one ...sorry, that's what happens when you spend the best part of a year collecting bits and pieces, but it is fun.
The right side of the shoe has been dabbed with silver acrylic paint and then I've stuck on some cogs I die cut out of an old pie dish. If you run the pie dish through the Bigshot without any dies it will squash it down nicely ready for you to select what you want to cut. They have been grunged a little with brown paint. 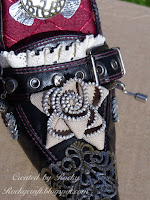 The cogs have been stuck on with silicone glue and some have screw top brads through them as well. There is another gem washer on the toe and the fizzy drinks can flower that you saw last month has been attached to the heel.

I hope Cinderella likes her shoe, the Prince could have The Boot. They would make quite a couple don't you think?

I didn't have a particular challenge in mind when I started this as I didn't know how long it would take. Imagine my delight this morning when up pops Make My Monday's new challenge of anything but a card!!!  There are also a couple of steampunk challenges on the go at the moment so lucky me. 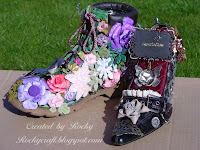 I would like to enter this shoe in the following challenges:
SanDee & Amelie's Steampunk Challenge - Fairytale
Try It On Tuesday - Inventors, Inventions & Steampunk
Make My Monday - Anything BUT a card
Crafty Emblies - Anything goes
Posted by Rocky at 10:47